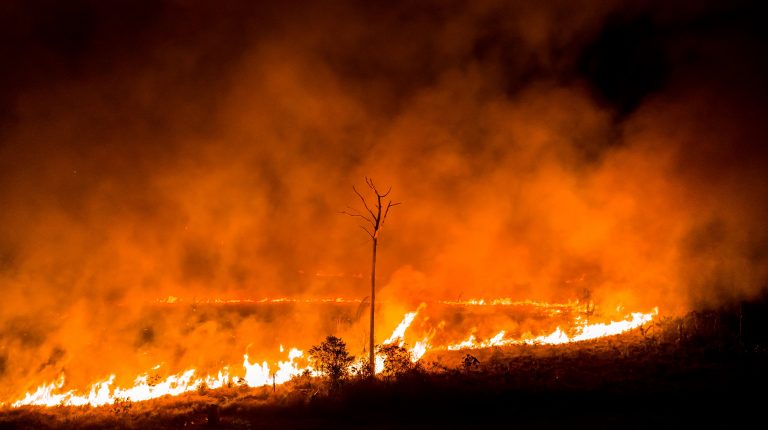 The Amazon rainforests in South America are being hit by a wave of wildfires that have sparked global anxiety about the dangers the blue planet may experience from the spread of such fires in its densest tropical forest, known as the Earth’s lungs.

Asked about the increase in fires in the Amazon jungle, Brazilian President Jair Bolsonaro accused environmental groups of igniting some of these fires to embarrass his administration.

But researchers from Brazil and the UK, contacted by Daily News Egypt, said there is a piece of evidence that the growing fires are linked to the recent expansion of deforestation. 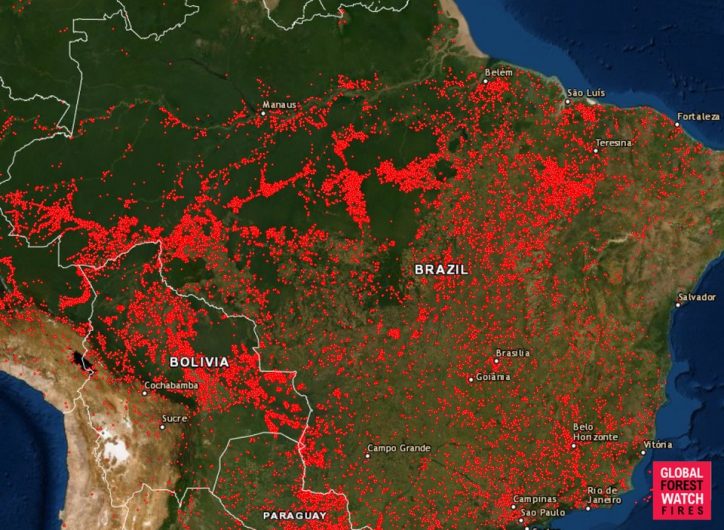 The fires are regular in the Amazon region throughout the year, but what attracted international attention this time – and although it began in the annual fire season in August each year – is the unprecedented fire rate.

On 20 August, the Brazilian Space Agency published data indicating that the country has experienced 84,957 fires this year, so far, an increase of 75% over the number of fires detected in the same period last year. About 40,000 fires were in the Amazon rainforest alone. The largest number of active fires in Brazil’s history was recorded in 2010 due to drought and the El Nino phenomenon, recording 127,147 fires.

The European Union’s Copernicus climate change service says the carbon dioxide released in August is the highest in a month since 2003. The fires also triggered high levels of carbon monoxide and caused heavy smoke to cover major Brazilian cities, such as Sao Paulo, which is hundreds of kilometres away from the fire centre.

The Amazon rainforest covers the drainage basin of the Amazon river and its tributaries in northern South America on an area of ​​6m square kilometres, six times the size of Egypt. The Amazon forests comprise of about 40% of Brazil’s total area and are bordered by the Giana Heights to the north, the Andes to the west, the Central Brazilian Plateau to the south, and the Atlantic Ocean to the east.

The Amazon rainforest is the richest and most diverse ecosystem in the world, containing millions of species of insects, plants, birds, animals, flora, and other life forms, many of which are still not fully discovered. Nearly 400,000 indigenous South American tribes, the Amazon forests, are also home.

“The fire season in the Amazon has just begun and the fires will continue to flare up to December. There is also a long dry season forecast, so this could indicate more fires than in previous years (throughout the entire dry season),” Carly Reddington, a researcher in the Institute of Climate and Atmosphere at the University of Leeds, spoke to DNE’s science editor.

Human fingerprints are apparent in the current fires, Reddington said, but she insists that the direct cause of the Amazon fires this year cannot be ascertained.

Moreover, Erika Berenguer, a senior research associate at the Ecosystems Lab at Oxford University, told DNE, “Fire is used as the endpoint of the deforestation process in the Amazon and as deforestation increases, so do fires. In the Amazon, to deforest an area, first, the forest is brought down by a tractor, then it is left to dry under the sun for a few weeks in the dry season. Once it becomes dry enough, it is set on fire, so the downed vegetation is turned to ashes and the area can be used for planting.”

Berenguer, who is also a visiting research associate at Lancaster University, added, “Since May this year we have seen a severe increase in deforestation in the region, according to data from the Brazilian Space Agency, so it is not a surprise that now we are seeing an increase in fires – the forests that were chopped down in the previous months are being set alight to give way to agriculture.” Paolo Mutino, an ecologist at the Amazon Institute for Environmental Research in Brazil (IPAM), said in an interview with Scientific American that most of the fires this year are not wildfires, but the result of increased waves of desertification and deforestation, especially as people use fire to clean up areas that have been deforested illegally. “Therefore, the current drought cannot be blamed for the high number of fires in the region. The drought is not severe this year compared to the last four years,” Mutino added.

Humberto Barbosa, a Brazilian researcher at the University of Arizona and a co-author of this year’s Intergovernmental Panel on Climate Change (IPCC) report on drought, categorically denies that the drought season has a key role to play in increasing fires in the Amazon this year. He said in media statements that the region has been hit by more severe droughts in previous years, however, the number of fires and the intensity were less than this year.

“The fact that fires are concentrated in newly deforested areas in a period of mild drought is indicative of the deliberate nature of fires, especially for clearing deforested areas,” he said.

“There has been speculation in the media and elsewhere that smallholder farmers felt more comfortable to start the fires because the government led by President Bolsonaro made no efforts to prevent this. However, as far as I know, you cannot comment on the possible political causes of an increase in burning, but what we do know is that almost all the fires in the Amazon have been ignited by humans,” Reddington noted.

The amount of forest area burned by these fires has not yet been estimated to compare with the effects of previous years’ fires, meaning that the size of the fires varies greatly and there may be many smaller fires this year.

It indicates that the burned area will be estimated using satellite data by scientists at the end of the dry season. A good indicator for estimating the intensity and magnitude of fires is how much carbon dioxide is released by fire, which Copernicus is currently monitoring.

Although Article 250 of the Brazilian Penal Code considers the practice of burning forests a crime that can be punishable by 3-6 years imprisonment and a fine, the Institute of Environment and Renewable Natural Resources (IBAMA) in Brazil notes government leniency in applying these sanctions. In 2019, fines were also reduced by 38%.

According to the Institute, ignoring the application of penalties for environmental offences has placed the protected areas under law, such as indigenous lands and protected areas targeted by fires, at great risk. 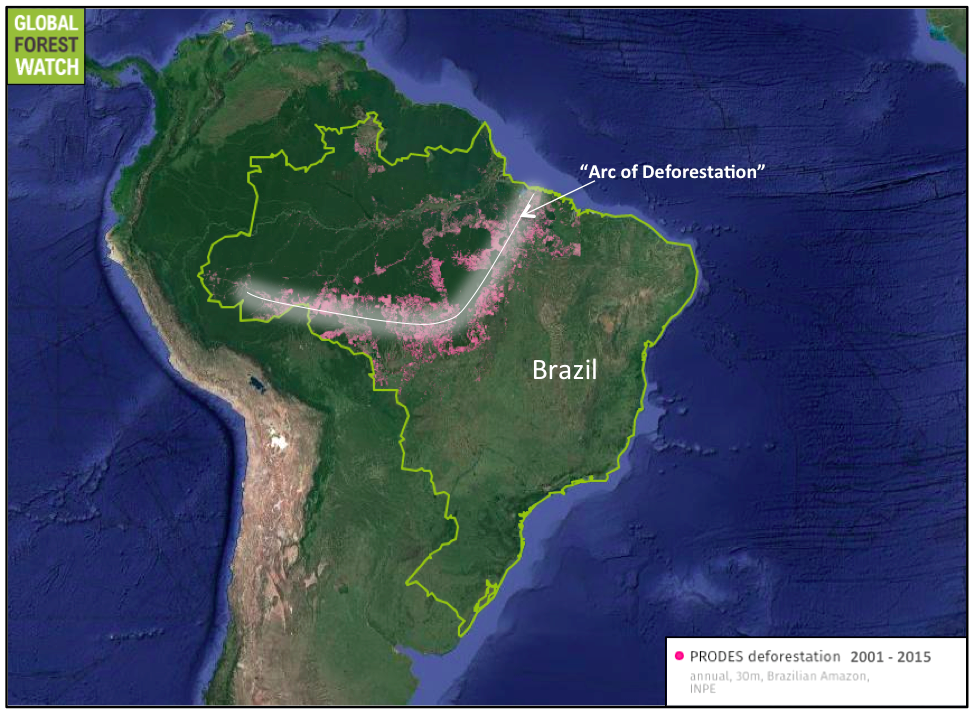 In addition to the environmental effects of fires, researchers are also concerned about health and climatic effects. One of the fires in the state of Rondônia caused a plume of smoke billowing thousands of kilometres to Sao Paulo, Brazil’s most populous city.

Impacts from deforestation or fire include affecting biodiversity by loss of natural habitats, reduced opportunities for carbon storage, lower rainfall, and increased drought. Rains in the Amazon depend on water released by deep-rooted trees, according to Redington.

Mutino stressed that deforestation and burning will reduce the number of trees evaporating. In other words, a decrease in the amount of water released by the forest into the atmosphere, which will affect the region’s rain system and its negative impact on agriculture in Brazil.

Berenguer told DNE that greenhouse gas emissions from deforestation are a larger contributor to climate change, so by chopping down and then burning the Amazon we are actually accelerating climate change.

“It is vital to keep the forest standing if the world is to achieve our target of an increase of only 1.5C in temperature, as per the Paris Agreement. In addition, the Amazon houses an enormous amount of biodiversity – for example, there are 16,000 tree species in the region, with new species being discovered every year – just the Amazon has more tree species than the whole of Europe. By deforesting it we are putting these species in danger of extinction,” she said.