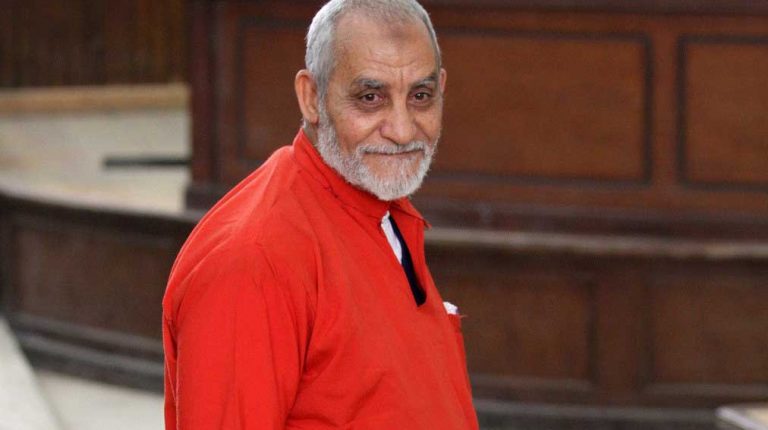 Among the defendants are senior Brotherhood members Mohamed El-Beltagy, Essam El-Erian, and Mohamed Badie, who were accused of “plotting against the interest of Egypt” with the Palestinian group Hamas and with Lebanese militia Hezbollah. El-Beltagy, El-Erian, and Badie are also defendants in several other violence and terrorism-related cases.

The prosecution argued that the Brotherhood group made arrangements with several militant groups to break into the heavily fortified prisons to facilitate their escape, on 28 January 2011, when police forces withdrew from their strong points after deadly clashes with protesters all over the country.

Meanwhile, the court has decided to drop all charges against former president Mohamed Morsi who died on 17 July in one of the case’s court sessions

Before announcing the sentences, Judge Mohamed Shirin Fahmy – who is responsible for looking into several cases where Brotherhood members are standing trial – denounced the group and its rhetoric, accusing it of “abusing religion to achieve their political goals.”

The judge was quoted by the private-owned Al-Shorouk newspaper saying, “the defendants and late president Morsi were supposed to be punished.”

Morsi received his first prison sentence in the “presidential palace clashes” case. He was also sentenced to 20 years for inciting violence. This sentence cannot be appealed.

In a different case, he was sentenced to 20 years after he was charged of insulting the judiciary, along with other defendants.

Morsi came to power in 2012 as the first democratically elected president in Egypt. However, his ouster came after mass protests on 30 June 2013 in opposition to his ruling. On 3 July 2013, the Egyptian Armed Forces ousted Morsi, annulled the constitution, and announced it will hold presidential elections.

After the ouster of Morsi, the Brotherhood was labelled a terrorist organisation in 2013, following a court decision that banned the group. Thousands of its members are being tried in front of the Egyptian judiciary.

A government committee authorised to monitor the assets of Brotherhood members was formed in October 2013 by the ministry of justice, following a verdict by an Urgent Matters Court to ban the activities of the Brotherhood and to confiscate its capital. As such, the committee froze the assets of hundreds of the group’s members, non-governmental organisations, and companies affiliated with the group.