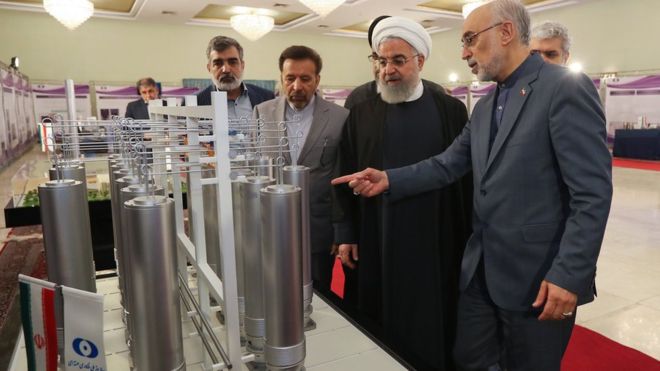 Iran announced on Saturday its intention to start the third step in reducing commitments under the Joint Comprehensive Plan of Action (JCPOA) with international powers.

Spokesperson for the Atomic Energy Organisation of Iran (AEOI), Behrouz Kamalvandi, said in a press conference, “After [reaching] the JCPOA, we were faced with non-commitments, whose culmination was the United States withdrawal from the agreement.”

In 2015, along with the United Kingdom, France, Russia, Germany, and China, the US agreed on a long-term deal with Iran on its nuclear programme for sanction relief.

Under the deal, Iran limits its nuclear activities and allows in inspectors of the Atomic Energy Agency (IAEA) to inspect its nuclear buildings to ensure that its sensitive nuclear programme will be exclusively peaceful.

“Four measures were adopted today, one of them was related to the paragraph 39 [of the nuclear deal] and the centrifuge machines. The centrifuges increase our stockpile [of enriched uranium] in addition to helping R&D activities. This measure has been adopted since yesterday and it will be declared today to the agency and our research products will be added to our stockpiles,” Kamalvandi said.

He added that Tehran has started injecting gas to IR6 centrifuges which was due to be carried out 11 years after the endorsement of the nuclear deal (2026), noting that a cascade of 20 IR4 centrifuge machines has also been assembled, according to the Iranian official news agency Fars.

“We have injected gas into a 20-set cascade of IR6 centrifuges since yesterday and assembling the 30-set cascade is our next plan,” Kamalvandi said.

Tensions between Washington and Tehran are at a high point over Iran’s nuclear programme, with the US increasing sanctions in the past year since US President Donald Trump withdrew from the 2015 nuclear deal.

In May 2019, US President Donald Trump announced pulling his country out of the deal, ignoring the warnings of European allies who stressed that they will uphold the deal.