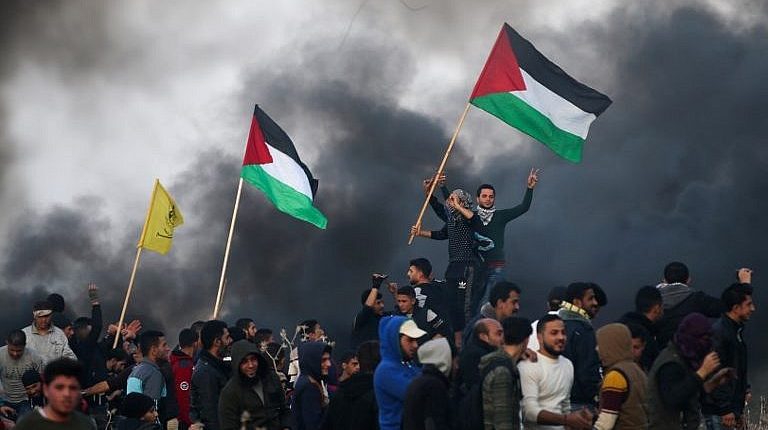 Palestinian health officials said Israeli forces killed two Palestinians aged 17 and 14, during protests along the Gaza-Israel border on Friday.  Also, up to 70 protesters were wounded, of whom 38 were shot by live fire during the protest.

Reuters, citing the Israeli military spokesperson, said more than 6,000 Palestinian demonstrators gathered at several points along the border in “violent protests” on Friday, as the protesters threw explosive devices, grenades, and firebombs.

Moreover, Israeli forces imposed a tight blockade on the town of Azzun in Qalqilya governorate in the West Bank, and intensified its presence in checkpoints, after a stabbing incident in the town, on Saturday.

Two Israelis were allegedly wounded in a stabbing attack in Azzun.  A 17-year-old was seriously injured while his 60-year-old father was lightly hurt in the attack committed by a 15-year-old Palestinian, according to The Times of Israel.

The UN envoy in the Middle East, Nickolay Mladenov, condemned the shooting of the two teens, describing it as “appalling.” He tweeted that “the cycle of violence must end,” demanding Israel to “calibrate its use of force,” using force “only as a last resort,” and as “response to imminent threat of death or serious injury.”

A few hours later in what seemed to be a response to the deaths, Palestinian militants in Gaza launched five rockets targeting southern Israel communities, the Israel Defense Forces (IDF) said. However, there were no reports of injuries and no Palestinian group claimed responsibility for the rockets.

In response, Israel struck a number of Hamas military targets in the northern Gaza Strip, the IDF added. The IDF also reported on Saturday that Gazan militants had launched a drone which dropped an explosive device into Israel, causing slight damage to an IDF vehicle. In retaliation, the IDF said it opened fire at the cell responsible for the drone.

In March 2018 the protesters launched regular weekend demonstrations, calling for easing the Israeli-Egyptian security blockade crippled Gaza, and for Palestinians to return to their families’ land which was taken since 1948. More than 200 Palestinians and Israeli soldiers have been killed during the marches.