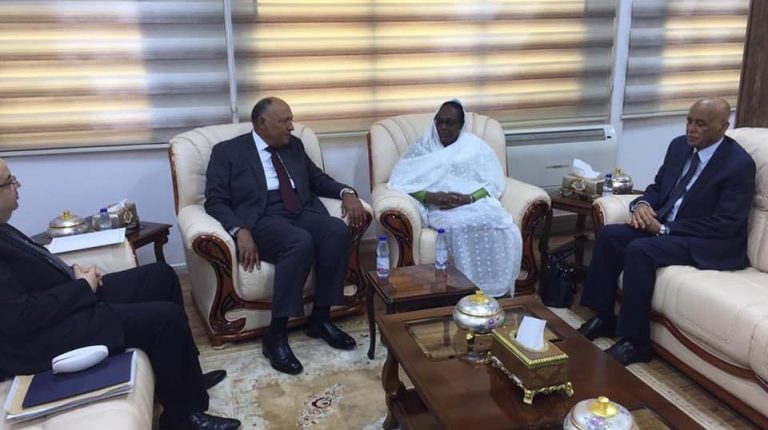 Egypt’s Foreign Minister, Sameh Shoukry, met with head of the Sudanese sovereign council, Abdel Fattah Al-Borhan, in Khartoum, where they discussed enhancing bilateral cooperation and means of supporting Sudan during the transitional period.

Shoukry conveyed a message of support to Al-Borhan from President Abdel Fattah Al-Sisi to express Egypt’s appreciation for the success of Sudan in the smooth transition to the current stage.

He also asserted Cairo’s continued support for Khartoum, referring to Egypt’s efforts to lift Sudan’s recent suspension from the membership in the African Union (AU).

The meeting included discussions on bilateral cooperation in all fields, and ways of supporting Sudanese people in facing various challenges during the transitional period in the fields of health, education, and the provision of basic services.

The Egyptian Minister also met with Prime Minister Abdalla Hamdok, and expressed support toward civilian rule, and praised the strong relationship between Cairo and Khartoum.

Moreover, Shoukry met with his newly appointed Sudanese counterpart, which happens to be the first woman to assume this position in Arab world. Shoukry extended his congratulations to Asmaa Abdullah on her new position, stressing Egypt’s full support for Sudan during the transitional period.

Abdullah expressed Sudan’s appreciation for the depth and specificity of the relations with Egypt, stressing the new Sudanese government’s aspirations to upgrade bilateral relations.

Shoukry’s visit to Khartoum came a day after the swearing-in of the Sudanese new transitional government. The visit came in special importance as it coincided at the start of a new phase of cooperation between the two countries to face challenges and coordinate stances on regional and international issues of mutual concern following the changes in Sudan.

Egypt has repeatedly urged stability in the neighbouring country since protests erupted in December 2018, leading to the ouster of long-standing president Omar Al-Bashir in April.