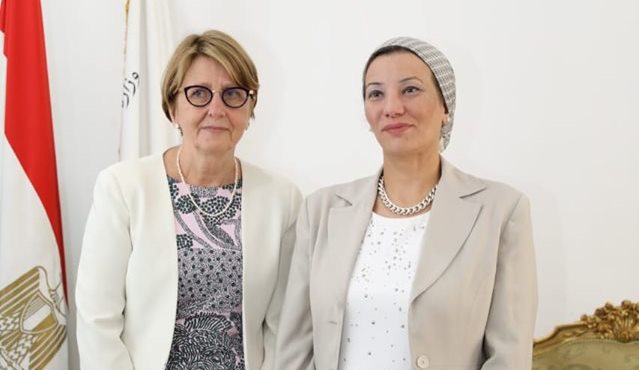 Egypt has recently achieved a lot in the field of environment through launching several initiatives, Laura Kansikas-Debraise, the Finnish ambassador to Egypt, told Daily News Egypt.

She recently met with Egypt’s Minister of Environment Yasmine Fouad, where both sides discussed ways of boosting bilateral cooperation in environmental aspects.

“We’ve also discussed the preparation of the next the climate action summit that will be held on 23 September 2019. We try to find out what are the expectations for each country, the objectives of the participation, and the similar points of view regarding the serious issues of climate change,” Kansikas-Debraise explained.

She discussed with Fouad boosting circular economy in Egypt – an economic system aimed at eliminating waste and the continual use of resources – and the possibilities to advance it. The ambassador stated that Finland offers its expertise on climate change and environment to the Egyptian side.

“Egypt and Finland are different counties. We start from different points…Egypt is a huge country and we are small, yet we can find common points to cooperate on,” the ambassador shared.

Both sides discussed Finland’s ambitious plan on climate change adaptation. “We have to start with ourselves and then work at the Nordic level, then European and global levels,” Kansikas-Debraise affirmed.

Finland’s National Climate Change Adaptation Plan 2022 is part of the planning system for climate change policy under the Climate Change Act. The government adopts the adaptation plan at least once every 10 years. The plan contains a risk and vulnerability assessment and sector-specific action programmes for adaptation, as considered necessary.

The aim of the National Climate Change Adaptation Plan is that the Finnish society has the capacity to adapt to changes in the climate and manage the risks associated with them. The plan was adopted as a government resolution on 20 November 2014.

The climate is warming despite mitigation efforts, and there is no way to fully prevent climate change, according to the plan, because of the warming climate and increasingly common extreme weather events and hydrological conditions, both the natural environment and societies are faced with exceptionally rapid changes.

Finland must prepare for and be able to adapt to the unavoidable consequences of climate change, such as increased flooding. Adaptation measures are aimed to prepare for the changing climate in all sectors of society. Taking adaptative measures at the earliest stage possible is the most cost-effective way to act.