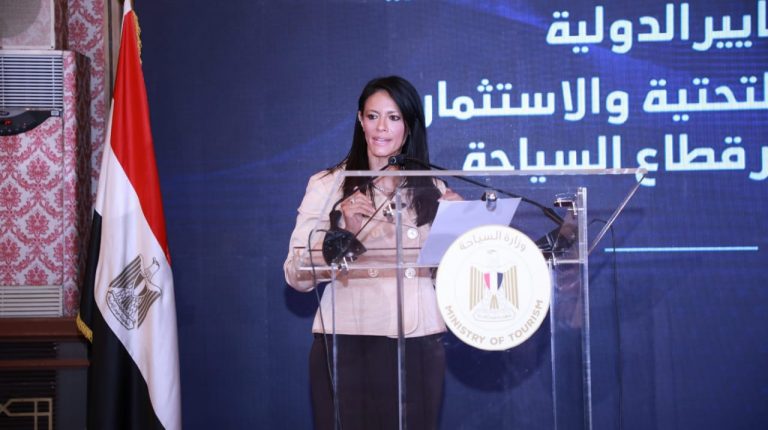 The Minister of Tourism, Rania Al-Mashat, announced on Monday during a press conference the new hospitality criteria for Egyptian hotels under the auspices of Egypt’s Prime Minister, Mostafa Madbouly, and in the presence of the Minister of Health, Hala Zayed, the Minister of Environment, Yasmine Fouad, Governor of South Sinai , Khaled Fouda, Governor of Red Sea , Ahmed Abdallah, Governor of Giza , Ahmed Rahsed, and Cairo Governor, Khaled Abdelaal.

Notably, the hospitality criteria for Egyptian hotels has not been updated since 2006.
The Chairperson for the Egyptian Hotels Association, Maged Fawzy, explained that this new criteria added new types of hotels, in light of increasing international demand on them, including environmental hotels, eco-friendly lodges, apartment hotels, dahabyas, and heritage hotels.

“The previous standards have also been updated in terms of the fixed hotels, resorts, floating hotels, taking into account the environmental dimension, green hotel standards, and the use of clean energy technologies, in order to contribute to the preservation of the environment and the protection of natural and heritage resources, “ he explained.

“This is an important step that will give the ministry the leverage to monitor the hotels and ensure that the quality of services provided to Egypt’s tourists are in line with international standards,” Al-Mashat said.

In that context, the minister explained that these new criteria were completed in coordination with the UNWTO and includes environmental, health, and hygiene standards.

AL-Mashat assured that the step of the new criteria for hotels is considered a major step in increasing the competitiveness of Egypt’s tourism sector.

The minister referred to the importance of the human element in the success of any system, hence she mentioned that the new criteria included controls and standards for providing accommodation for workers.

Al-Mashat declared that the ministry has trained inspectors of the ministry’s hotel control sector on the new standards by experts from the UNWTO to ensure their readiness to execute their work once the new system is implemented.

She explained further that 23 inspectors from the hotel control sector in the ministry have been trained on the new system, and six TOT trainers have been trained to ensure the continuation of the qualification and its development. They were also trained on the use of a tablet especially manufactured for this purpose, as part of Egypt’s digital transformation plan, to ensure that the evaluation process is conducted with integrity and transparency.

In that term, Fawzy announced that hotels will be given a period of six months to accommodate these new standards.

In a recorded video broadcasted in the conference, the Secretary General of the UNWTO, Zurab Pololikashvili stated that this new system of hotel classification will make Egypt’s more competitive.

Floating hotel numbers to reach 155 by end of current season