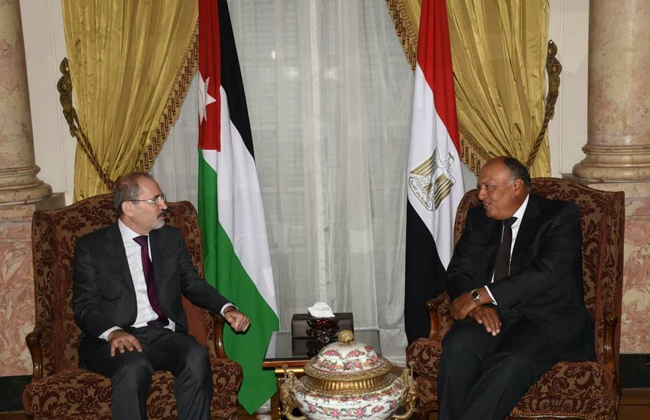 Foreign Minister Sameh Shoukry held talks with his Emirati and Jordanian counterparts on Tuesday to discuss bilateral cooperation and regional issues of mutual concern. The meetings were held ahead of the 152nd session of the Arab League Council at the ministerial level.

Shoukry met United Arab Emirates State Minister for Foreign Affairs Anwar Gargash where they discussed possible ways to cement relations between the two countries. The two diplomats also tackled the topic of counter terrorism.  Shoukry highly appreciated the common resolve of the political leaderships in Egypt and the UAE to promote the two countries’ relations.

Shoukry also met Ayman Safadi, the Jordanian Minister, where they discussed the Palestinian cause, as well as the updates in Syria, Yemen, and Libya, in addition to fighting terrorism.

Recent years have witnessed close coordination between the two countries on key issues such as the Palestinian, Iraqi, Lebanese, Libyan, Yemeni, and Syrian issues. There is a great convergence of views and political stances on regional issues, especially in combating terrorism and extremism.

Meanwhile, the 152nd session of the Arab League Council kicked off on Sunday in Cairo.

The meeting comes ahead of the Arab Foreign Ministers’ meeting to be headed by Iraqi Foreign Minister Mohamed Ali Alhakim on Tuesday. Iraqi ambassador to Cairo, Ahmed Al-Dulaimi, called on bringing Syria back to the Arab League.

A set of issues will be discussed during the meeting, such as the Palestinian cause, the Israeli violations in Jerusalem, and Palestine’s financial burdens and support for its budget.

The agenda addressed the latest developments in Lebanon, Syria, Yemen, and Libya as well.