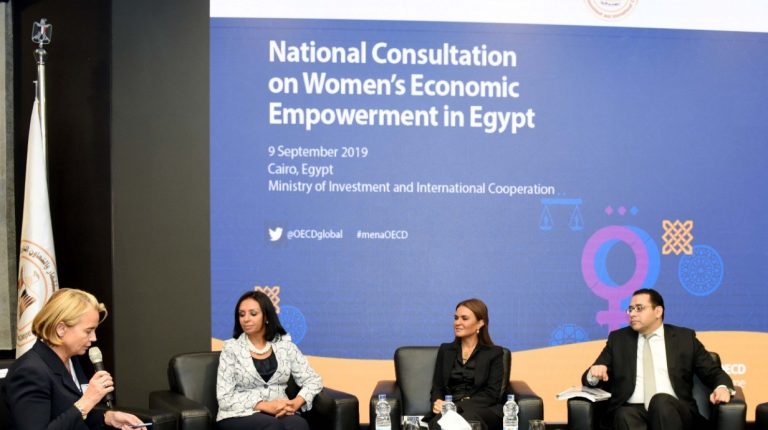 The Chief of Staff of Organization for Economic Co-operation and Development (OECD), Gabriela Ramos, thanked Egypt President, Abdel Fatah Al-Sisi for the presence of eight female ministers in the Egyptian government, praising the country’s agenda for empowering women.

She added that the OECD seeks to support the Egyptian government’s plans to empower women. It also supports the state on its economic reform agenda, praising what Minister of Investment and International Cooperation, Sahar Nasr, has accomplished regarding empowering women in the Investment Law.

Her remarks came during the National Discussion Conference for the Women’s Economic Empowerment, which was organized by the OECD, in cooperation with Egypt’s Ministry of Investment and International Cooperation, and the Swedish embassy.

Furthermore, she pointed out that Egypt plays an important role in the region in terms of empowering women, noting that many African countries have taken Egypt as a leading example in the implementation of economic reforms related to the empowerment of women.

Meanwhile, Egypt’s Minister of Investment and International Cooperation (MIIC), said that the ministry is working on legislative reforms and investment policies to improve the economic empowerment of women, as well as to attract investors to inject new investments in Egypt, especially businesswomen.

She explained that the ministry has cooperated with the OECD in improving the investment environment and the empowerment of women, asserting that the state looks forward for further partnerships with the organisation.

The minister pointed out that the MIIC focuses on attracting more investments to provide job opportunities for women and youth, which contributes to their empowerment.

Moreover, Nasr asserted that since the beginning of her term, the political leadership has directed all the ministers to support women’s empowerment in all fields.

Nasr referred to the New Investment Law, mentioning for the first time in Egypt’s history an article on the Investment Law is allocated with the aim of achieving women’s economic empowerment.

Women have already benefited from economic empowerment programmes, especially the initiatives of the MIIC to finance women entrepreneurs, to become businesswomen, She shared.

The minister pointed out that all projects are coordinated with the National Council for Women (NCW) and the relevant ministries to have a proportion of women in all institutions, pointing out that the state is investing in human capital, especially in health and education in order to benefit women.

For her part, President of the NCW, Maya Morsi, asserted that Egyptian women played a big role in the economic empowerment agenda. There are eight women ministers representing 25% of the cabinet.

She also highlighted that the percentage of women in the cabinet will reach 25% in the next cabinet formation.

She thanked the minister for her efforts in empowering women and businesswomen, pointing out that the NCW has a strategy for women’s empowerment, which includes four axes: economic empowerment, decision-making, leadership, social protection, legislation and social change.

Furthermore, Morsi said that the Investment Law’s provision on gender equality is important for economic empowerment, in addition to the New Inheritance Law which criminalises the infringement upon women’s inheritance rights, asserting that these are the outlets for women’s economic empowerment.

“Reforms by the MIIC in business will increase women’s participation at the economic level,” Morsi said.

He explained that women`s empowerment is a solution to many social and economic problems, including FGM, early marriage, and the large increase in births, noting that these problems represent a continuous circle.

Randa Abulhassan said that the UNDP implemented a significant number of programmes to empower women, in cooperation with the Egyptian government.

“The situation would be much improved if women were made aware of their rights, since women’s empowerment would increase economic growth by 7%,” Abulhassan added.

The number of employed females increased from nearly 23.8 million to 25.4 million between 2010 and 2016, corresponding to an average annual growth rate of 1%. The growth was three times higher among females than among males (2.26% and 0.73%, respectively). This increase improved the distorted male/female balance, as the percentage of female employees increased from 19.6% in 2010 to 21.1% in 2016, according to the report.

In 2016, the number of women in management positions as an employment percentage in Egypt was only 7.1%, according to Morsi.

Meanwhile, the Project Officer in Women’s Economic Empowerment at UN Women, Engy Amin, told Daily News Egypt that women’s representation in the labour force stands at only 22%, compared with 87% for men.

“Unfortunately, most women in Egypt work in the informal sector, and over 45% of women working in the agriculture sector are women,” she said.

Additionally, she explained that working in the informal sector has a lot of disadvantages including that women would lack any health insurance, pensions, in addition to adding no value to the country’s GDP.

“Egypt’s GDP will increase by 34% if females receive equal opportunities with men in the workplace,” she concluded.