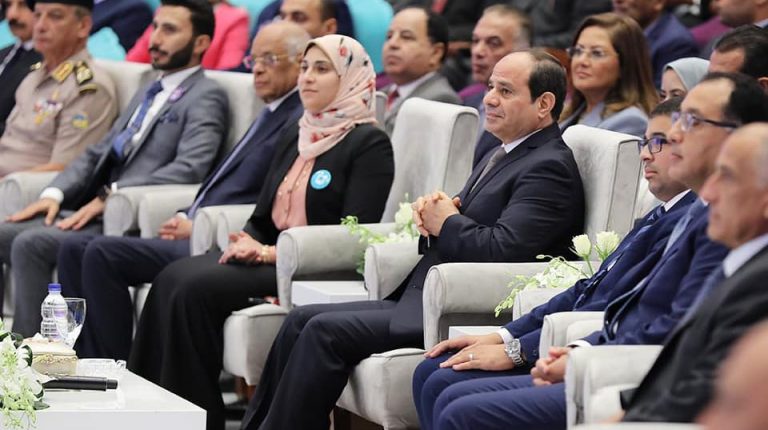 The president’s remarks came during a session, titled “Impact of spreading lies against state in light of the fourth-generation war”, which mainly focused on how spreading false information attempts to hinder the country’s progress and underestimates any success.

The session included a discussion on the social media’s impacts and a documentary was displayed about social networks and how they may create hatred campaigns and spread rumors.

Al-Sisi said that rumors that have been spreading since 2018 contributed in misleading the people. “Rumors on social media target making the Egyptians lose faith in themselves and in their country, creating a state of uncertainty which would make them believe false information,” he added.

Al-Sisi stressed that all the allegations circulated recently against the Egyptian army on social media are untrue and baseless, commenting on corruption claims made by an Egyptian contractor.

“I’m speaking to everyone who have put their trust in me: Your son is honest, trustworthy, and loyal,” President Al-Sisi said.

He also warned that no one can attack Egypt as it has the most powerful army in the region. “We have a strong, honorable, and solid army.”

“I have built a bridge of trust between me and the Egyptians that can never be damaged,” the president said.

Al-Sisi added that the state implemented projects of more than EGP 4tn in the recent period only, and the army has supervised road projects of EGP 175bn. Egypt has thousands of contractors and construction companies that have projects of billions of pounds.

“Yes, I have built presidential palaces, and I will build more, but those are not for me, as I am actually rebuilding the country,” Al-Sisi revealed, making light of those who speak falsely against him. “I will work more and continue what I’m doing, but not for me,” the president said in response to allegations that he used state funds to build a family cemetery.

“Terrorism is the only weapon capable of destroying the society, as happened in some other countries,” Al-Sisi warned during a NYC session, titled “Evaluating the experience of combating terrorism locally and regionally.”

“Without the existence of states that adopt and sponsor terrorism in order to implement their political agendas, the idea of terrorism would not have spread or succeeded,” he said, adding “the phenomenon of international terrorism is a monster that has become out of control of those who launched it.”

“The cost of eradicating terrorism is high, unlike the cost of combating it, and daily cost of fighting terrorism in Sinai is unimaginable, and Egypt would never fall in the presence of its army, despite all attempts to destroy it,” Al-Sisi concluded.

The one-day conference was announced last Tuesday and consisted of three sessions, including the “Ask the President” session. It was attended by 1,600 young people, university students, engineers working in national projects, and entrepreneurs.