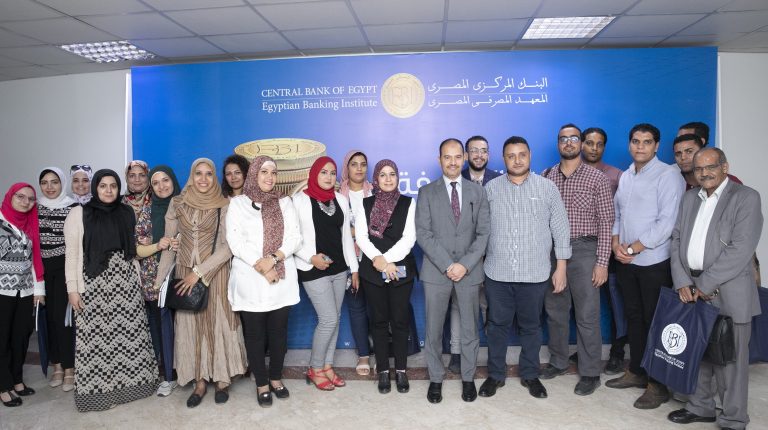 The role of the Egyptian Banking Institute (EBI) is not limited to training employees in the banking sector, but also affects directly and indirectly various categories of Egyptians, the EBI Executive Director, Abdel Aziz Nossier, said during a press conference held last Wednesday.

The media briefing revealed the most important achievements and activities of the EBI during fiscal year (FY) 2018/19, which ended in June.

He added that the EBI plays a significant role in improving financial education for different segments of citizens, from children and school students through young people and university students. In addition, we provide employment training programmes for university students. These efforts aim to support the state and the Central Bank of Egypt’s (CBE) plan for achieving financial inclusion.

During the conference, Nossier stressed that the institute has achieved, under the umbrella of the CBE, many outstanding accomplishments and initiatives to cope with the rapid developments in Egypt in all fields. This includes developing financial and banking services which have seen breakthrough in the Egyptian and African banking sector.

“We hope that the EBI turns to be an educational lighthouse, especially for those working in the Egyptian and African banking sector. We hope that the institute turns to be the perfect choice for anyone who wants to increase his knowledge and experience about finance. This is a dream that we started and we believe we are on the right track, and the statistics show that,” he added.

Nossier also explained that the total number of beneficiaries of training and services provided by the institute reached more than 95,000 people in FY 2018/19, an increase of 70% compared to FY 2017/18.

Nossier explained that the institute has implemented during the last FY two training courses of the utmost importance: the first project was a financing programme, and the second was a certificate in corporate credit analysis.

He pointed out that the corporate credit analysis course is similar of what JPMorgan offers to its employees. These courses are offered for the first time outside the United State. It included 33 trainees and lasted from January to April 2019.

The institute also had a great success story with the Agricultural Bank of Egypt, as it evaluated about 18,780 bank employees, whether for recruitment, promotion, or development, he added.

“The institute has made many achievements to support the human element in the African banking sector, through training and exchange of experiences, under the umbrella of various initiatives launched under the sponsorship of the CBE in 38 African countries,” Nossier said.

He added that the institute has implemented 70 international programmes and 15 visits to banking and financial institutions with international bodies and institutions, including Moody’s Analytics, Euromoney Learning, House of Learning, ATTF, Financial Edge Training, Institute of Directors, and JPMorgan.

The visits also included the Netherlands; India; the United States; Singapore; the United Kingdom; Italy; South Africa; Malaysia, and Spain, in order to keep abreast of the latest developments in the global banking sector.

“I stress that the EBI does not miss a chance for developing the human element and the infrastructure of the banking sector,” Nossier said.

He explained that the institute has signed a memorandum of understanding with the Information Technology Institute, under the sponsorship of the CBE and the Ministry of Communications, to come up with clear educational paths in the field of financial technology. He pointed out that about 36 trainees received specialised programmes in this regard.

Moreover, Nossier added that the institute also started offering a wider variety of training courses. For example, there are now sign language programmes for employees in the customer service departments “tellers”, pointing out that a number of banks requested such courses.

He added that the EBI also provides programmes for security sector workers, bank headquarters management officials, safe driving, as well as training courses for journalists in the economic field.

“The institute’s activities during the last FY included strategic participation in the preparation of one of the most important economic conferences in Africa, the Seamless North Africa 2019 Conference organised by the CBE in Cairo, hosting the seventh meeting of the Arab Banking Training Network (ABTN), and implementing the certificate of “business development specialist” within the Nile Pioneers Initiative, sponsored by the CBE, Nossier said.

Emphasising the institute’s commitment to international quality standards, Nossier said that the international accreditation of the institute was renewed from the Accrediting Council for Continuing Education & Training (ACCET) for a third period until 2024. The EBI was the first institution in Egypt and the whole region to receive this accreditation in 2009 for a period of five years. A renewal was made in 2014 for another five years.

During the last FY, the institute was awarded by the Child & Youth Finance International (CYFI) for its efforts during the Global Money Week.

He pointed out that the institute carried out large activities in Sohag governorate to support financial inclusion. Its team conducted visits to universities, schools, mosques, churches, and chambers of commerce there, holding meeting with farmers, whether men or women.

He stressed that all of this would not have happened without the unprecedented support received by the institute from the governor of the CBE, whether moral, financial, or logistic support.

Nosseir stressed that he is looking forward to exerting more efforts to provide better services to all employees of the banking sector, which contributes to pushing the Egyptian economy.

Additionally, he pointed out that the institute is expanding and renovating its headquarters and branches to keep pace with the latest methods of learning, including lecture halls, teaching tools, scientific material, and developing the skills of the lecturers themselves.

He explained that the development of about 25% of the scientific material at the institute during the last FY was completed, and the whole development process is expected to be completed by the end of the current FY.

The institute deals with about 38 African countries in the field of training and transfer of expertise, according to Nossier. Plus, the institute aims to increase the number of those countries by 10% in the coming period, focusing on the Nile basin countries.

He explained that the institute is studying the establishment of a special training unit in cooperation with several African countries, pointing out that the first part of the study has been completed, and its results were very promising. Then, the institute will get the approval of its board of directors to establish the unit.

According to Nossier, the expansion of the institute in the African continent comes within a number of objectives that the EBI seeks to achieve during the current FY. They also include diversification in entrepreneurship programmes, raising the efficiency of the internal operations of the institute, and the completion of the development process.

In addition, he added that the institute is currently based in Cairo and Alexandria, and intends to open a new branch in Upper Egypt in the coming period, pointing out that the plan for establishing a branch in Port Said was halted, as it has been proven to be useless.

Nossier stressed that the e-learning programme launched by the institute in February 2018 prevents it from expanding through high-cost branches that will not be resorted to unless the market really needs them. He ruled out the possibility of establishing branches in foreign countries, at least presently.