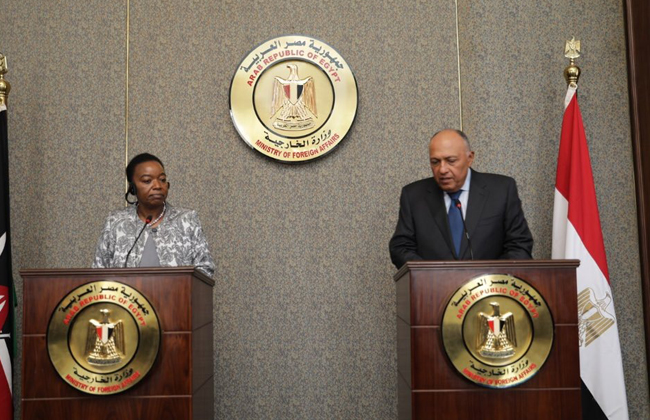 Egypt would be harmed if we could not reach an agreement soon regarding the Grand Ethiopian Renaissance Dam (GERD), Egypt’s Minister of Foreign Affairs, Sameh Shoukry, said during a joint press conference on Sunday with his Kenyan counterpart Monica Goma.

The failure to achieve common ground on the GERD contradicts the international law which governs the transboundary waters, he added.

His statements on the GERD came in response to questions during the conference, about the regular tripartite meeting between the ministers of irrigation of Egypt, Sudan, and Ethiopia scheduled for Sunday.

Shoukry said Egypt believes negotiations should be “technical and scientific” and not exposed to any political interpretation, and the agreement should be reached on a scientific basis only, confirming Egypt’s readiness to study all opinions and ideas from any side.

“Egypt is always ready to reach consensus regarding the GERD, and the agreement should be reached as soon as possible. There is no room for any party to impose its will on the others,” Shoukry said.

Furthermore, Shoukry commented on Sunday’s meeting saying: “Today, the three countries are expected to resume negotiations on the implementation of the agreement’s principles signed in March 2015 after an interruption of about a year and three months. A period beyond what was planned.”

The minister continued, “During the past four years, the three countries have not achieved any solid progress regarding the filling and operation of the dam.”

Shoukry also noted the international advisory studies which was agreed upon by the three countries to determine the effects of the dam have stopped.

“Egypt hopes to overcome all these obstacles very soon,” Shoukry stressed, adding that Egypt always affirms its respect to the right of Ethiopia to development, as long as this will not lead to any harm to other countries.

However, he expressed hope that the meeting of irrigation ministers would result in a fruitful agreement that preserves the rights of all concerned parties.

“We hope Ethiopian and Sudanese parties are ready to discuss our ideas and plans, and we accept any comments and in-depth discussion related to this plan,” Shoukry concluded. He referred that Egypt has previously submitted an integrated plan based on the previous discussions held during various meetings, which would achieve justice for the three countries and meet their interests equally.

For his part, the Kenyan FM Monica Goma said she delivered to Shoukry a message from Kenya’s President to Egyptian President Abdel Fattah Al-Sisi in his capacity as the African Union’s chair.

She added that her discussion with Shoukry dealt with issues of peace and security in Africa and how to strengthen relations between the two countries.