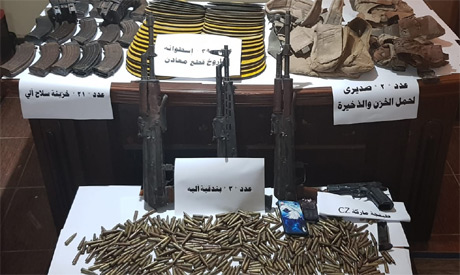 The statement noted that the targeted militant group was preparing to carry out a series of attacks against checkpoints affiliated to police and army forces in North Sinai.

“Police forces monitored the targeted militant group and found them stationed in a truck meant to attack checkpoints. Forces received orders to impose a siege on them, however they engaged in a shootout that led to the death of the group’s members,” the statement read.

The statement added that several automatic weapons, ammunition, and tools used in the manufacturing of bombs were found. Moreover, a pistol was found, which belongs to a police officer who was killed by the group in January 2018.

“Our information and analysis indicate that this terrorist cell had been assigned by their fleeing leaders abroad to carry out these terrorist operations in the framework of their destructive plans in conjunction with attempts to influence the morale of the armed forces and the police,” the statement explained.

Before Sunday’s attack, three conscripts were killed and two others were injured on Saturday, in an attack by gunmen targeting a military checkpoint in the Egyptian city of Al-Arish, according to media reports.

In response to the attack, Egyptian security forces in North Sinai killed four militants. The attack against the checkpoint was conducted by unidentified gunmen on the ‘El Mahager’ area in Al-Arish city.

An Egyptian security source said in media statements that, “three conscripts were killed as a result of a militant attack that took place using rocket-propelled grenades.”

The source pointed to the outbreak of clashes between police forces in the ambush and the attackers, which also resulted in the killing of four militants and the escape of the remaining gunmen from the ambush to the desert south of Al-Arish.

According to the source, Egyptian warplanes immediately flew over the area and began to chase the perpetrators of the attack. Security forces had closed the international road in the centre of Al-Arish between North and South Sinai.

Army and police forces in Egypt are engaging in a widescale militant operation launched in the presence of the Islamic State (IS) in North Sinai since February 2018. The operation is aiming to get rid of the IS affiliated group of ‘Sinai Province’ that has been previously known as ‘Ansar Bayt Al Maqdis’ group and currently became ‘Sinai Province’ in 2014 after declaring its affiliation to the IS.

Since the start of the ‘Sinai 2018 Comprehensive Operation’, the rate of militant attacks conducted by the IS against army, police, and civilians has decreased due to many counter attacks performed by the army against militants’ posts.