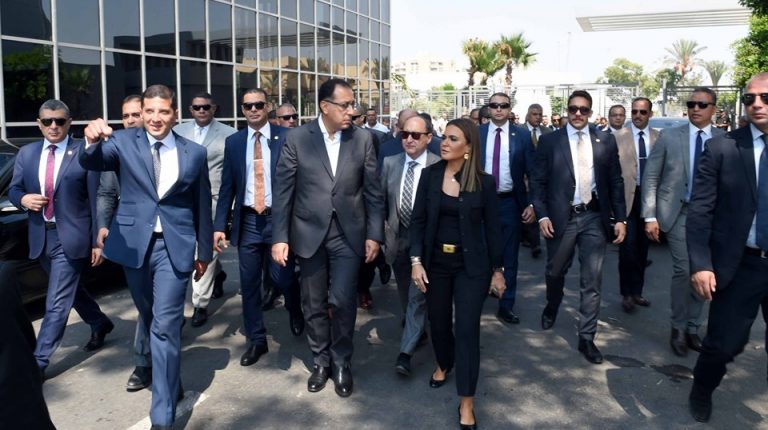 Prime Minister Mostafa Madbouly, visited the Free Zone in Nasr City Monday after the completion of its development works in the presence of the Minister of Investment and International Cooperation, Sahar Nasr, the Minister of Local Development, Mahmoud Sharawy, the Minister of Trade and Industry, Amr Nassar, and the Governor of Cairo, Khaled Abdel-Aal Abdel-Hafez, as well as Acting Chief Executive of the General Authority for Investment & Free Zones (GAFI), Mohamed Abdel Wahab.

The prime minister began his visit by inspecting the Free Zone Investors Services Centre, where he praised the efforts exerted to develop the infrastructure in the free zone, which shall reflect on the work flow and shorten the time for procedures. He highlighted the role of free zones in attracting foreign and local investments and boosting exports.

For her part, Nasr said that the free zones are currently witnessing a comprehensive development process, the first in 50 years, under the directives of President Abdel-Fattah El-Sisi. The infrastructure, including utilities, electricity, water, sewage, and fire systems, have all been replaced and upgraded, including services such as the internet, cameras, metal detectors, and insurance.

She noted that the infrastructure is currently being developed in the rest of the free zones, especially in the governorates of Alexandria and Port Said, mentioning that the mechanisation of the free zone in Nasr City has been in accordance with the latest international systems and standards.

Nasr also pointed out that the process of automating work procedures on all free zones is under way, adding that the ministry aims to stop fraud and smuggling, along with establishing a digital archive and providing all services via the ministry’s online portal using e-payments and e-signatures.

The minister stressed that new regulations have been established to clarify the right of the state and the right of the investor, in addition to a unified model and modernisation of all contracts. She pointed out that the current free zones have about 1,100 projects with capital amounting to $12.8bn and investments of $26.2bn, providing over 1m direct and indirect jobs. The free zones have realised activity, including exports, worth $17.8bn in the last fiscal year (FY).

She highlighted that work is currently underway on the establishment of seven new free zones in Minya, south Sinai, New Ismailia, Giza, Gamasa, Aswan, and Kafr El-Sheikh. These zones will accommodate over 1,000 projects and create 120,000 jobs, bringing the total number of free zones to 16.

With regard to the free zone in Nasr City, Abdel Wahab said that it currently includes 206 projects with a capital of $3.8bn, investments of $6.8bn, and carrying activities, including exports, worth $1.8bn in the last FY.