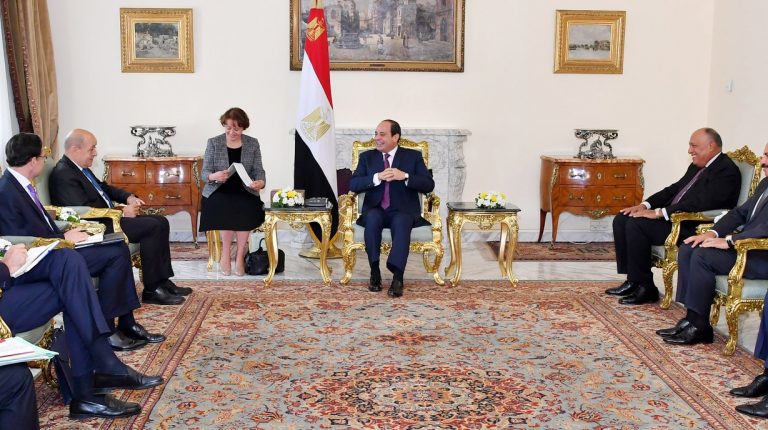 The meeting addressed issues in mutual interest including the French invests in Egypt and the economic reform in Egypt which was hailed by the French guest according to the statement of the Egyptian presidency. They also discussed the latest updates in Libya and Syria as well as the combating terrorism efforts.

During the conference, Shoukry pointed out that bilateral talks with his French counterpart focused on regional issues including Syria and Libya, Yemen, and recent tensions in the Gulf region.

Shoukry reaffirmed that the security of the Gulf is as important as Egypt’s security, echoing President Abdel-Fattah Al-Sisi’s earlier statements.

Furthermore, Shoukry added that they also addressed enhancing cooperation in various fields in light of the historical relations between Egypt and France.

Meanwhile, Le Drian revealed that there are more than 150 French companies operating in Egypt, where 170,000 Egyptians are working.

For Le Drian, he said that both parties addressed recent updates in Sudan and are looking to remove its name from the United States’ list of state sponsors of terrorism.

Le Drian added that he and Shoukry discussed regional issues including the situation in Libya, as they insisted that the political solution is the way to end the crisis of the war-torn country.

Earlier, the pair sat down to discuss recent regional updates and issues of common interest.

The visit came after Le Drian visited Sudan on Monday where he announced that France supported Sudanese authorities with aid worth €60m.

Le Drian’s visit to Sudan is the first of its kind for any French Foreign Minister in the past 10 years.

Additionally, Le Drian met with Sudanese Foreign Minister, Asma Abdallah, as he praised the mass protests which overthrew the autocrat Omar Al-Bashir. He pledged to push for removing Sudan from the US list of state sponsors of terrorism.