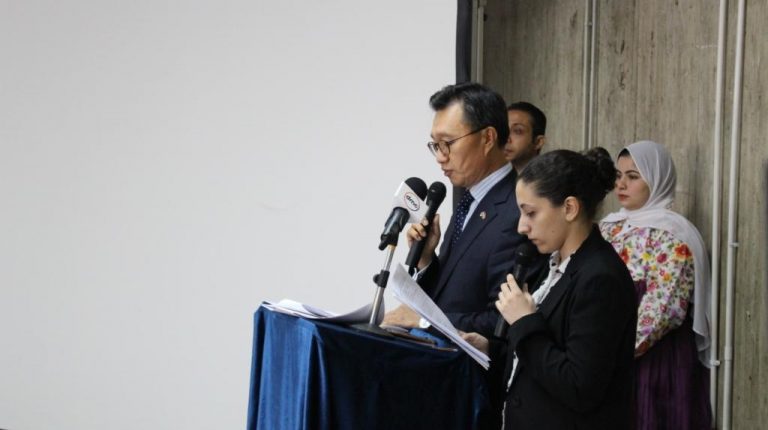 The event hosted a number of vulnerable children from Sudan, Yemen, and Ethiopia. This was the first event of its kind in Egypt. In cooperation with the IOM, KOICA donated school supplies and books for the children at the end of the event.

The event was organised in cooperation with volunteers from Ain Shams University students, KOICA volunteers, and the Egyptian Taekwondo Federation.

South Korean ambassador to Egypt, Yeocheol Yoon, stressed the importance of learning Taekwondo especially at an early age, as it adds more noble values to the child’s personality.

During his speech at the event, the ambassador also presented a KOICA volunteer who has been spreading awareness of Taekwondo in Egypt for more than 30 years and working with excellent Egyptian athletes.

The ambassador also stated that Taekwondo is one of the most important factors linking Egypt and Korea.

Other prominent figures also attended the event, such as President of the Egyptian Taekwondo Federation, Amr Selim, and head of the IOM Egypt, Laurent De Boeck.

During the event, representative from the Egyptian Taekwondo Federation introduced Taekwondo to the children and taught them some defensive skills through a Taekwondo demonstration.

Korean volunteers and Ain Shams University students carried out some cultural activities to introduce the Korean culture including traditional food, clothes, and games.

The Korean embassy and the KOICA Egypt office hope to continue such efforts for the prosperity of Egyptian people, the ambassador asserted.