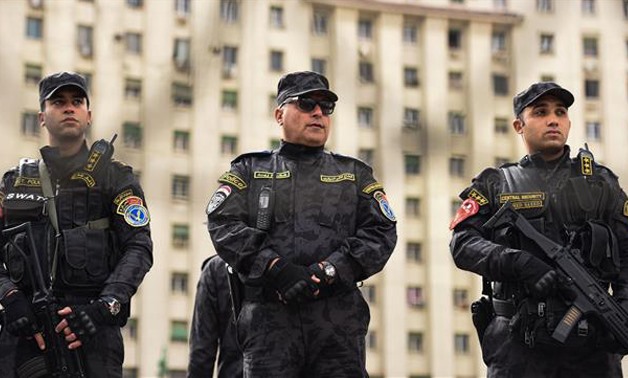 Nine terrorists were killed in a fire exchange with police forces during raids in El-Obour and 15th May cities, Egypt’s Ministry of Interior said on Wednesday.

The statement revealed that a leader in the ‘Liwa Al-Thawra’ (Revolution Brigade) terrorist movement known as Khalf Al-Dahshory was among them.

The leader was involved in two assassinations of Brigadier-General Adel Ragaie and targeting a police ambush in Menoufiya governorate.

Security forces seized from among the terrorists six automatic weapons, two cartridges, a quantity of RSALT and nitrates, a set of electrical circuits, an explosive device, and two bomb structures.

Ragaie was shot dead in front of his house in Obour City, 35km north-east of Cairo in October 2016.

At that time, ‘Liwa Al-Thawra’ claimed responsibility for the assassination in a tweet saying that they shot him in the head and took his weapon.

The group released a video in November revealing the details of the assassination as well as showing alleged violations by army forces, accusing Ragaie of being responsible for killing hundreds and detaining thousands.

Moreover, on Tuesday, Minya’s Criminal Court issued life sentences to 11 defendants and 15-year prison terms to 106 others in a mass trial for offences related to an attack on a police station in 2013.

The court also sentenced 30 others to prison terms of between three and five years. The defendants are facing charges of joining an outlawed group, inciting violence, and vandalism of public and police institutions.

The convicted were charged in relation to the storming of Samalout police station in Minya and the setting of a court building and administrative prosecution headquarters on fire, following the dispersal of the Islamist protest camps at the Rabaa and Nahda squares in August 2013.