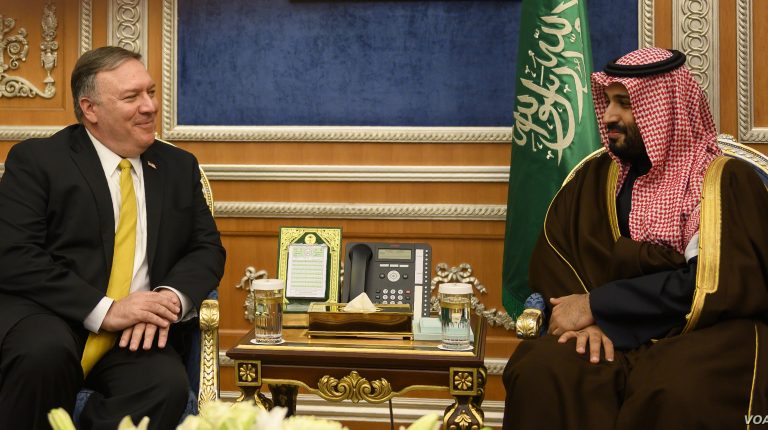 The United States’ embassy in the UAE announced on Wednesday that the US Secretary of State Mike Pompeo met with the Saudi Crown Prince Mohammed Bin Salman in Jeddah on Wednesday to discuss the latest attack on Saudi oil facilities.

In a series of tweets on its official account on Twitter, the US mission in the UAE said that the meeting comes as part of Pompeo’s trip to the Gulf region, particularly Saudi Arabia and the UAE.

His meeting with Bin Salman aims to confront the “Irani aggression” and coordinate with partners in Saudi Arabia and the UAE to combat the Iranian intervention in the region. Following his visit to Saudi Arabia, Pompeo will meet the Emirati Crown Prince Mohammed Bin Zayed in the UAE to discuss regional and bilateral issues.

The Houthi movement claimed responsibility for the attacks, but the US insists on accusing Iran of being behind the attack which has a wide impact on the international oil trade. Iran denied the US’s allegations and announced on Monday that it would cooperate with the United Nations to restore stability in Yemen.

The US claimed that it has evidence about the location of where the drones that attacked the Saudi facilities were launched from within Iranian soil.

On Wednesday, Iranian President Hassan Rouhani said that the US’s allegations against Iran aim to pressure Iran by “defaming” it, in addition to the economic pressures on Iranian people.

The attack received international reaction, one of these latest reactions came from the French presidency on Tuesday night expressing the intention to send experts to Saudi Arabi to take part in the investigations against the Aramco attack.

Meanwhile, the US Department of State warned American citizens of travelling to Saudi Arabia. The department warned US citizens in Saudi Arabia particularly from using the Abha airport without the permission of the chief of the US mission to Saudi Arabia.

Abha airport is a frequent target for attacks by the Houthi movement in Yemen which is supported by Iran which launches drone and missile attacks on Saudi territories from time to time.