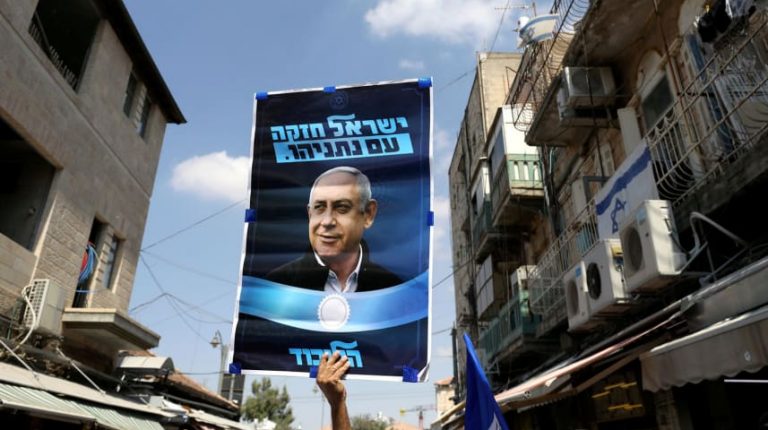 Israel’s Prime Minister Benjamin Netanyahu appeared to fail in securing a majority in the Twelfth Knesset according to initial results in the repeat general elections in five months.

With 92% of the votes counted, results showed that Netanyahu’s Likud party got only 31 seats, while his rival Benny Gantz’s centrist Blue and White alliance has 32, according to Israeli media.

The results also showed that Labor-Gesher got 6, and Democratic Union had 5.

With such results, Netanyahu’s bloc of right-wing and ultra-Orthodox parties is expected to get 55 seats, while the centre-left bloc would head with 56 of 120 seats.

Any prime minister needs a majority of 61 seats in parliament to form a government.

Netanyahu delivered a speech on Wednesday to his Likud party, saying that he will wait for the official results of the election. He insisted that he would form “a strong Zionist government.”

To strengthen his situation in the elections, Netanyahu vowed last week to annex parts of the occupied West Bank if he returned to office this week. He announced that he intends to impose “Israeli sovereignty over the Jordan Valley and northern Dead Sea.”

On Tuesday, six million Israelis headed to the polling stations to cast their ballots with voter turnout reaching 60%, according to Israeli media, compared to 61.3% in April’s vote and less than 62.4% in the 2015 election.

The September election is the second in five months as Netanyahu failed to form a coalition following April’s election.

Netanyahu’s Likud National Liberal Movement is a right-wing party established in 1973. He has been in power since 2009, besides another term from 1996 to 1999.

Meanwhile, Gantz, Netanyahu’s strongest rival, formed the centrist Blue and White alliance with a promise to unite the country from the division which took place in recent years.