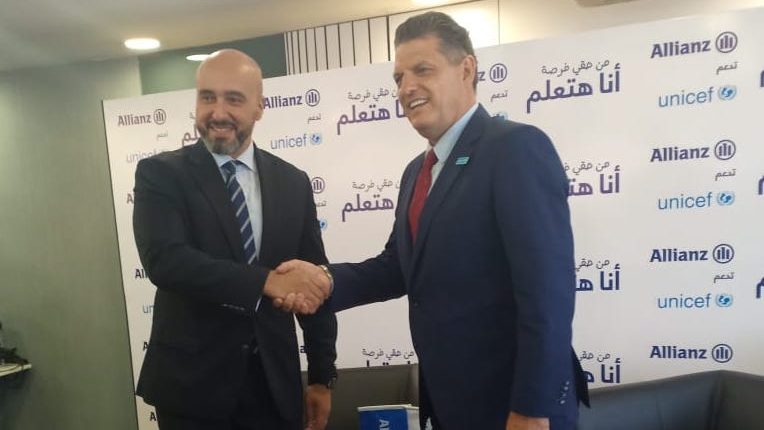 Allianz announced launching a social inclusion initiative, in collaboration with UNICEF, on Wednesday.

The initiative, called “I Deserve a Chance: I Will Learn”, aims to support and protect vulnerable children and families in Egypt through social inclusion programmes. This comes in line with the government’s efforts to enhance the educational system as the year 2019 was declared the year of education.

Allianz has committed a total of EGP 6.5m over the next three-year period, which will be partly funded through sales of Allianz’s insurance policies on life or vehicles in Egypt, effective since signing the agreement earlier in March.

Chairperson of Allianz, Ayman Hegazy, explained that the choice of life and vehicles’ insurance policies specifically are due to the fact that customer turnout is higher in such policies than others.

“This partnership is a remarkable investment in a better future, both socially and economically. Allianz is aware of its significant role in developing the societies it operates in. This is why we focus on supporting health, education, and social inclusion by using our stance as one of the strongest financial communities in the world, with 92 million customers in more than 70 markets which rely on our insurance products and funds for their financial well-being,” he said.

Meanwhile, UNICEF Representative in Egypt, Bruno Maes, said, “Bringing together government, civil society, and the private sector to fulfil children’s needs is at the heart of UNICEF’s work. We all have a collective responsibility to ensure that every child will have a healthy and safe life.”

Maes added that the UNICEF initiative is fixated on solving major issues, such as deprived children from their rights to a decent life in Egypt.

Statistics show that 9% of children aged 5-17 are involved in child labour in rural areas, which doubles to 18% in more underprivileged areas, he noted.

“Additionally, early marriage has reached 17% among females who are obliged to get married before turning 18 years old. The anticipated funding by Allianz is considered an important contribution to this joint work to improve social inclusion for underprivileged children in Egypt,” Maes added.

Notably, Allianz launched the first stage of the programme, focusing on the joint responsibility to provide the best opportunities to every child, including their rights to receive proper education. The funding UNICEF receives from Allianz will help support government efforts to provide integrated and urgent policies addressing child poverty issues. It also contributes to improving social inclusion, with a focus on underprivileged children, and enhancing education accessibility and affordability, by conducting research to ensure that those most in need are targeted.

Bundesliga: Bayern Munich turn the screw in a reminder of champions past