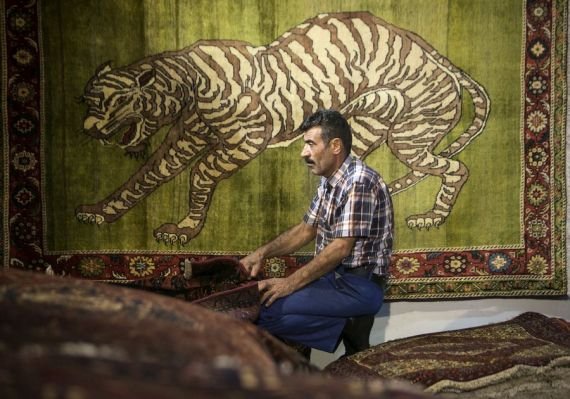 The booming scene of the five-floor building at Ferdowsi Square in Tehran, dubbed as carpet center of Iran, has turn out to be almost empty without lingering visitors as before.

The crippled carpet center is a miniature of Iran’s economy, which has become sluggish since May last year when U.S. president announced an unilaterally withdrawal from the nuclear deal, officially known as the Joint Comprehensive Plan of Action (JCPOA).

The JCPOA was reached in July 2015 between Iran and the P5+1 — the United States, Britain, France, Russia, China plus Germany — together with the European Union.

After scrapping the pact, Washington then imposed harsher sanctions on Iran’s oil exports and other key industries, such as steel, automobile and shipping, resulting Iran a predicted three to four percent GDP loss in 2019.

Meanwhile, the sanctions have sharply depreciated the Iranian currency, and the Iranian import and export trade has been blocked.

Iran’s proud Persian carpets are also on the list of sanctions, and its exports have been cut by nearly half in more than a year. According to the Iranian Carpet Export Association, Iran produces about 400 tons of hand-woven rugs each year, over 80 percent of which are exported.

Moni, who runs a salestore at the carpet center, is spending idling time from morning to afternoon since most days there is few customers visiting his shop.

“Because most of the raw silk of precious woven carpets needs to be imported from China and South Korea, the devaluation of the Iranian currency rial has caused the cost to rise by more than 50 percent,” he said.

In addition to rising costs, sanctions have led sharply decrease of foreign tourists, he said, adding that the stores in the carpet center are all suffering from poor sales.

“We all have serious pressures and are unable to make ends meet. Many shop owners have already transferred their stores or closed them directly,” he said.

Natayiena, a middle-aged local woman, just finished her window shopping at the carpet center and said “I have been here three times to pick up a new piece of carpet so as to replace the old one in the living room, which has been used for almost eight years.”

“But after getting opinions from family, I decided to give up since it equals our half-year food cost,” said the housewife, who has occasionally traveled abroad for vacations and shopping before the U.S. sanctions, and now the rial is getting less and less valuable, and her spending outside of necessities has been greatly reduced.

Besides non-living necessities, the depreciation of the local currency also led to a sharp rise of food consumer price index. So far, staple, beverages as well as non-staple foods, such as vegetables, beef, mutton and eggs all doubled their rate over the 15-month sanction period.

At present, many state-subsidized meat shops in Tehran have adopted a purchase restriction policy, which stipulates the maximum weight of meat purchased at preferential prices. There are often long queues in front of such meat shop, and sometimes people even spend two hours buying a kilogram of lamb.

Many foreign companies for pharmaceutical, paper and agricultural products have terminated trade with Iran due to exchange rate and sanction pressures, resulting in large price increases or even out of stock for drugs and papers that are closely related to people’s livelihood.

Taking office paper as an example, the price of A4 paper has risen by three times so far, which has caused print shops to close down one after another, companies have been forced to implement “paperless office”, restaurants have cancelled paper menus, and newspapers and magazines have been reduced in volume.

Hossein Mogadam, a local political commentator pointed out that although people are facing some difficulties under the current sanctions, they will not succumb to pressure nor get bullied by the United States.  ■