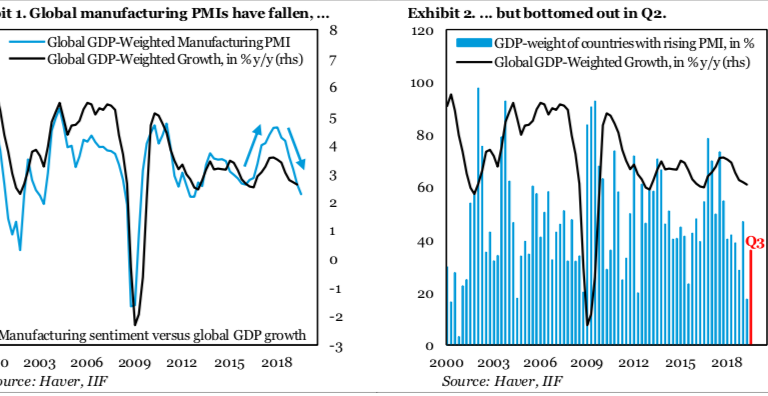 Turkey and Argentina stand out for violent disinvestment cycles that approach 2008/19 in severity, but adverse spill over into disinvestment does not look to be a broader phenomenon in emerging markets (EMs), with growth contribution from investment remaining positive and large in key countries, according the Institute of International Finance (IIF) in its latest report entitled “The Constructive Case For Global Growth And Risk Assets.”

Looking across advanced countries, the IIF stated that the investment activity has been weakest in Australia, explaining that it perhaps is due to elevated trade tensions and slowing growth in China.

“Surprisingly, though investment has certainly slowed in the UK, Brexit uncertainty has not taken gross fixed capital formation negative,” according to the IIF.

The IIF showed that the most recent data, mostly for the second quarter (Q2) of 2019, shows weak investment activity in Canada and Australia, consistent with some fallout from trade tensions, but spill over to the rest of the Group of 10 (G10) is, at this early stage at least, modest.

The G10 consists of eleven industrialised nations that frequently meet on an annual basis or more, as necessary, to consult each other, debate, and cooperate on international financial matters. The member countries are Belgium; Canada; France; Germany; Italy; Japan; the Netherlands; Sweden; Switzerland; the United Kingdom, and the United States, with Switzerland playing a minor role.

In a global view, the IIF mentioned that the markets have been anxious about the global growth outlook for some time, with weak manufacturing data interacting with trade tensions to dim sentiment.

“Amid the gloom, we detect early signs that manufacturing may have troughed in Q2 of 2019 and has been rising throughout Q3,” the IIF noted.

Regarding Egypt, the business sentiment around future activity soared to its highest in one-and-a-half years in August, as more Egyptian firms expressed optimism for growth, according to the IHS Markit Egypt Purchasing Managers’ Index (PMI) issued early in September.

Notably, the Central Bank of Egypt decided to cut interest rates by 1.5% in late August, slashing the overnight deposit rate, lending rate, and the rate of main operations to 14.25%,15.25%, and 14.75% respectively.

Earlier, Radwa El- Swaify, head of research at Pharos Holding, told Daily News Egypt that the interest rate cut would improve the business sentiment, output, and productivity, which would of course improve the PMI reading, expecting it to break above 50 points before the end of calendar year 2019.

Unfortunately, Egypt’s PMI reading for the non-oil private sector fell by 1.7%, recording 49.4 in August, just below the 50-point threshold that separates growth from contraction, down from 50.3 in July.