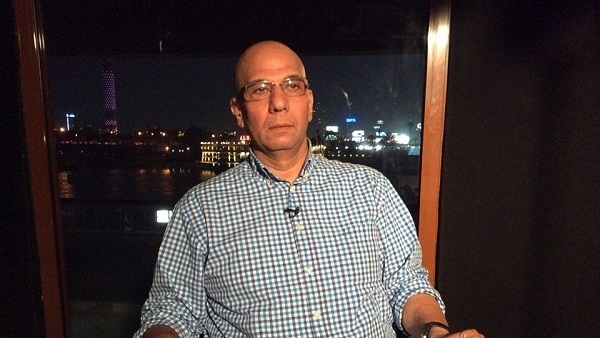 Security sources said on condition of anonymity that preparations are now underway in Sudan to extradite wanted militants to Egypt after reaching common understanding. Madin Ibrahim Hassaneen is the first one to be extradited to Egypt under this arrangement.

Madin is a leading figure at the Ansar al-Sharia Brigades and is convicted of murdering police officers in Sharqeya governorate in Egypt.

According to security sources, Madin, 59, adopts the Takfir Wal-Hijra (Excommunication and Exodus) ideology which was founded by Shukri Mustafa in the 1970s. Madin was also responsible for establishing Ansar Al-Sharia (Sharia Advocates) militant group in Sharqeya in the period that followed the Rabaa sit-in dispersal.

The Radical Islamist Takfir Wal-Hijra group, also known as Jama’at al-Muslimin (The Assemblage of Muslims), appeared in Egypt in 1971. The group’s first leader Shukri Mustafa was born in June 1942. He was executed by an Egyptian court in connection with the assassination of Egypt’s former religious endowments minister Sheikh Dahabi. It considers the modern Egyptian society as ‘infidels’ and believes that it is the Muslims’ duty to separate themselves from it until they can return in strength to conquer and Islamise the country, as Prophet Muhammad did to Mecca.

Although the group was crushed by the Egyptian security forces. It is said to have paved the way for extremists’ extensive activity in the subsequent years and decades.

Ahmed Atta, a political researcher at the Middle East Forum in London, told Daily News Egypt that Madin Hassanin Ibrahim is one of the leaders of the jihadist elements who emerged in the early 1970s and promoted the idea of Takfir Wal-Hijra.

He added that Madin participated in the jihadist project against the Soviet Union during the invasion of Afghanistan where he met with groups of jihadi leaders, including Abu Anas Al-Libi, leader of Ansar al-Sharia which blew up the United States embassy in Tanzania in Dar es Salaam, killing over 200 people.

Atta noted that the 2011 US National Security report confirmed that Ansar Al-Sharia has a branch in a number of Egyptian governorates.

Madin was arrested more than once during the rule of former president Mubarak due to the establishment of military cells affiliated with Ansar Al-Sharia.

“Madin was detained in Wadi Al-Natroun prison where he met with the ousted Islamist president Mohammed Morsi. In prison, the two were able to meet and create a plan to move the larger jihad movement towards a unified ‘Free Islamic Army’ to include all jihadist factions throughout the Arab world,” Atta said.

“Madin fled prison with Morsi during the 2011 Revolution with the help of armed factions of Hamas and the outlawed Muslim Brotherhood leaders,” Atta added.

“After the Brotherhood topped the political scene in Egypt. Morsi and Madin met again in the presence of the Brotherhood leading member Khairat Al-Shater, where Madin offered to facilitate the return of the Islamist militants from Afghanistan and Pakistan to start forming the ‘Free Islamic Army’ to serve the jihadist state project,” he continued.

“Al-Shater agreed to finance the project and asked Madin to tour Turkey, Libya, Sudan, and Tunisia where he got advanced training on communication between jihadist factions by the Turkish intelligence,” according to Atta.

“Madin returned and established armed focal points in the Brotherhood sit-ins of Rabaa and Nahda, and called on all supporters across Egypt to join these militant points,” Atta claimed.

Atta clarified that after the collapse of the Brotherhood project and in the wake of the 30 June uprising, Madin travelled to Libya, then to Sudan where he settled and “formed security units for fugitive elements of the Brotherhood. This unit was fully funded by Qatar.”

Atta said that Sudan’s current transitional government is seeking a new era with Egypt through extraditing wanted extremists such as those Brotherhood affiliates, unlike the previous period of ousted Sudanese president Oma Al-Bashir.

Moreover, the UAE newspaper of Al-Ain quoted an Egyptian security source saying that Egypt has officially addressed Sudan to hand over dozens of wanted militants.

The source added that the most prominent of these names are three leaders of the Shura Council of the Brotherhood, Yasser Hassanein, Mohammed Sharif, and Helmi Al-Jazzar. The source added two leading figures, Yousef Harbi and Abdulhadi Shalabi.

Egypt demands that Sudan hand over some 70 members of the Brotherhood’s armed wing, most notably Ahmed Abdel Meguid and Mustafa Tantawi, the two main suspects in the attempted assassination of former Alexandria security chief Mostafa El-Nemr.

Many leaders of the Brotherhood recently escaped from Sudan to Turkey. The most dangerous of them is Al-Jazzar who is accused of violence incitement.

Al-Jazzar fled to Istanbul early this year and appeared a few days ago accompanied by Brotherhood preacher Youssef al-Qaradawi at his home.

Other prominent Brotherhood names, who are based in Sudan, are Mohamed Abdel Malik El-Halouji, an Egyptian Brotherhood official in Sudan; Mohamed El Behairy, head of the International Brotherhood Organisation in Africa; and other Brotherhood leaders including Mohamed Farid, Hossam El Kashef, Ahmed Awad, Tarek Seif, and Medhat Radwan

On the nature of security coordination between Egypt and neighbouring countries, an Egyptian security source told Al-Ain that Egypt worked to consolidate its relations with its neighbours and concluded agreements at the highest level to extradite fugitive elements accused of terrorism.

The source asserted that a high-profile security team is responsible for the implementation of the arrangement to arrest fugitives in Arab countries, most notably Kuwait and Sudan, praising the speed of coordination and effective cooperation.

Several Arab countries are expected to hand over several Egyptians associated with the Brotherhood soon, he added. This international cooperation is the result of multiple Egyptian requests for the extradition of these terrorist elements, as well as Egyptian delegations’ visits to those countries to follow up on the matter.

Sudan was a safe haven for Brotherhood members fleeing Egypt after the 30 June Revolution, mainly due to its proximity. The number of Brotherhood fugitives in Sudan after 2013 reportedly exceeded 3,000.

A source close to the group says that most of the Brotherhood members in Sudan are wanted in terrorism cases in Egypt. In addition, many of them do not have valid passports or personal identity due to their illegal entry into Sudan.

Although Egypt has repeatedly called on Sudan since 2014 to hand over wanted Brotherhood members, the former Bashir government has ignored the requests and supported the Brotherhood’s presence there.

During his recent visit to Cairo, head of the Sudanese Military Council, Abdel Fattah El-Burhan, promised Egyptian President Abdel Fattah Al-Sisi that he would not accept Sudan to continue as a safe haven for terrorist groups. The two sides signed an agreement to tighten security measures on borders and fight terrorism.

Are there strategic constants unifying Muslim Brotherhood and political powers toward the Palestinian issue?