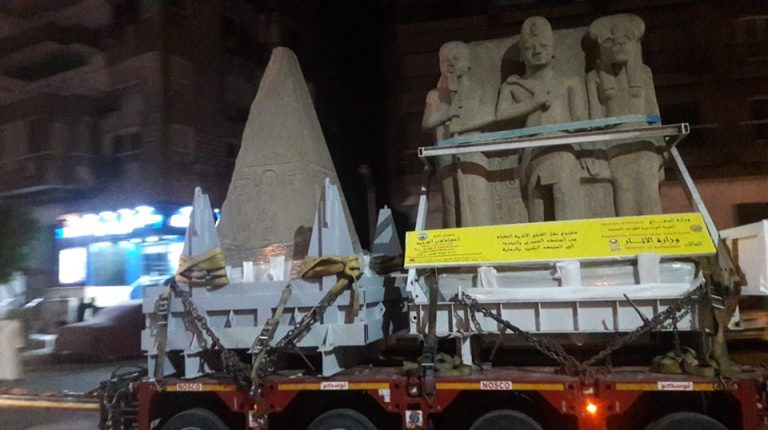 Four giant relics were transferred on Friday to the Grand Egyptian Museum (GEM) from Tahrir’s Egyptian Museum, in preparation for displaying them on the museum’s grand staircase when the museum opens next year.

The antiquities include two large statues featuring Senosert I, who was second the pharaoh of the 12th Dynasty in Egypt, and a 20-tonne, red granite statue featuring Ramses II standing between the gods of Ptah and Sekhmet, as well as the top of a Hatshepsut obelisk, which weighs 14 tonnes.

The giant relics were displayed at the garden of the Egyptian Museum, and they were moved to be displayed at one of the GEM’s most capturing areas.

The process took four hours from Cairo’s Downtown into Giza’s GEM overlooking the pyramids. The process is a part of the final preparations for the grand opening of the GEM, planned for 2020. The exact time of the opening of the museum has yet to be released.

The four antiquities will be part of the 100,000 artefacts the museum will put on display, including the whole collection of Tutankhamun’s belongings and the antiquities that were found in his burial chamber.

The GEM’s planned-to-be-showcased antiquities reflects Egypt’s various historical eras; from prehistory through to the Greek and Roman periods.