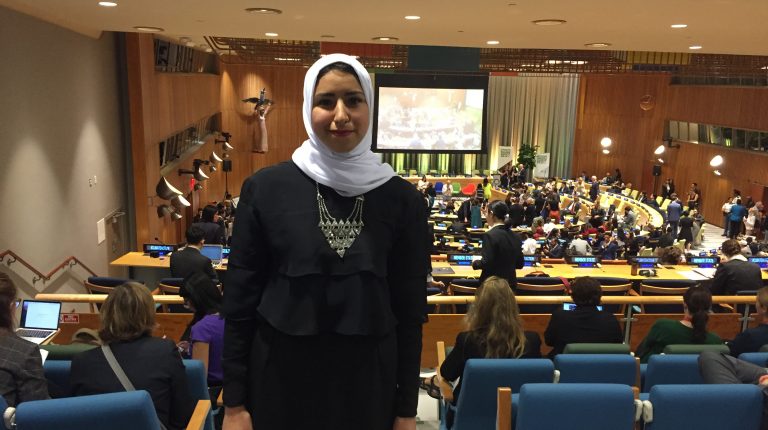 New York – The UN Youth Climate Summit kicked off on Saturday at the United Nations headquarters with the participation of hundreds of youth from all over the world. The summit comes a few hours following mass protests in New York and worldwide calling for immediate climate action.

Young leaders who are driving climate action came to the UN ahead of the 74th General Assembly to showcase their solutions, and to meaningfully engage with decision-makers on the defining issue of our time, climate change.

Bringing together young activists, innovators, entrepreneurs, and change-makers who are committed to combating climate change, the summit is part of a weekend of events leading up to the UN Secretary-General’s Climate Action Summit scheduled for 23 September.

During his opening speech of the summit, the UN Secretary-General Antonio Guterres hailed the efforts exerted by youth and young leaders all over the world to address the climate issue.

“Hold my generation accountable. Keep mobilising. Keep going, Keep pushing,” said Guterres, adding that “one of the problems of world leaders is they talk too much and listen too little.”

The 16-year-old Swedish environmental activist Greta Thunberg participated in the opening session and delivered a brief speech thanking the young leaders worldwide, postponing her full speech to the 74th session of the UN General Assembly (UNGA 74) in order to give chance for more youth to speak.

“We need to engage youth much more in the climate crisis because youth have more to do,” she said.

“Change minds, don’t change the climate. Change the environmental crisis,” said Ahmed, who believes that the climate crisis has two sides to be considered. The first is scientific and the other side is the role of decision makers.

“Government has authority to take actions, and scientists are able to provide solutions. What we need to is to work together,” Ahmed added. She noted that the environmental awareness is not high among youth in Egypt, so we need to spread awareness through traditional and social media.

Amelia from Fiji, a student of marine science and a climate activist, told DNE that she is participating in the summit to help in raising international awareness about climate change and climate justice.

“We need to adopt policies that do not harm the environment. The role of youth is really important in this regard,” she added. “If we are sitting in the table, we actually have a voice,” she said.

Liyana from Malaysia, a PhD researcher on ocean resources and environmental changes, told DNE that voice of the Global South, including her country, is not heard enough although this region is highly impacted by the climate change. She called for world leaders to take immediate action to address the climate crisis.

DNE also talked to another participant, Mutia from Indonesia, who has a NGO working on raising the environmental awareness and spread renewable energy solutions.

She noted that climate change is related to politics, so decision makers are the ones who should take action in addressing this crisis.