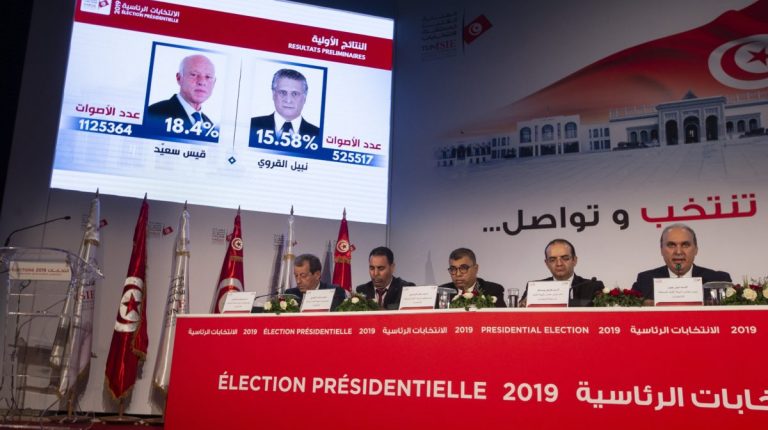 Tunisia surprised the world as usual, as two political outsiders head to presidential runoff in the country’s second free and democratic presidential elections since Jasmine Revolution in (December 2010-January 2011), in what could be seen as a “rebellion” against the political establishment.

Tunisians now have to choose between Nabil Karoui, a jailed businessperson and media mogul who is facing charges of money laundering and tax evasion, or Kais Saied, a little-known law professor. 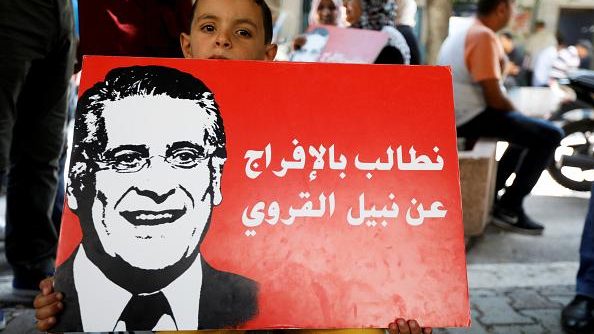 According to the electoral commission’s Wednesday announcement, Saied received 18.40% of the votes and Karoui took 15.58%. The date for the runoff has not yet been announced, but it could be in October, as the parliamentary election is scheduled on 6 October.

Both long-shot candidates, one independent who flirts with Tunisia’s Islamists and the other is secularist who is running for office behind bars, surprisingly defeated a former prime minister, a defence minister, a former president, and Tunisia’s mammoth Ennahdha Party’s candidate Abdelfattah Mourou.

Adding more drama to the political scene, Tunisia’s ousted president Zine El-Abidine Ben Ali died last Thursday in self-imposed exile in Saudi Arabia aged 83, a day after the results of the second round were announced.

Ben Ali, who spent 23 years in office, was toppled in January 2011 following a sweeping revolution which inspired other Arab countries in the Middle East to follow Tunisians’ steps.

Since then, nine successive governments led the country, but all failed to solve its economic, security, and political problems.

Economically, the unemployment rate reached 15.30% in 2019. For security, two suicide attacks hit the capital killing two, including a police officer, and injured several others. Earlier in October 2018, a female suicide bomber blew herself up in the Avenue Habib Bourguiba, wounding 20 people including 10 police personnel.

In July, the Tunisian President Beji Caid Essebsi passed away after a severe health crisis forcing the national election to be held on 15 September instead of 17 November.

The voter turnout was 45%, compared to 63% in the 2014 election, the Independent High Authority for Elections announced.

According to the 2014 Tunisian Constitution, the president and a government chosen by parliament share executive powers and governing, as the president has authority on foreign and defence policy. 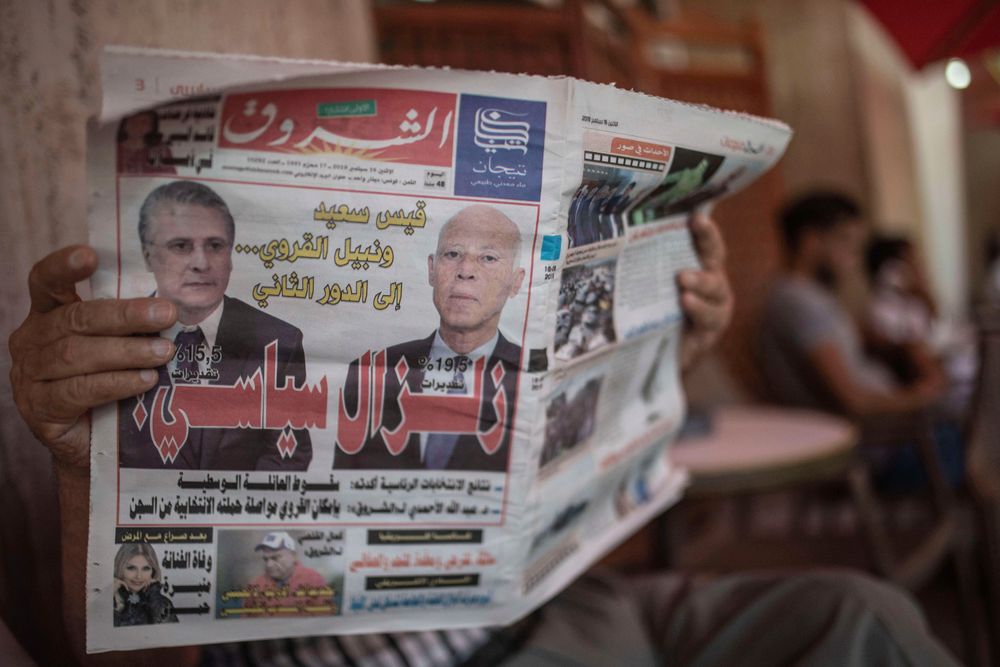 “Much like elsewhere across the globe, Tunisians are gravitating toward people from outside the system who can bring them what they want – whether it is economic improvement or social dignity,” Yerkes added.

She pointed out that the presence of one of the candidates, Karoui, in jail, tremendously complicates the electoral process.

“As several observation missions have noted, the timing of Karoui’s arrest makes it impossible for him to have fair access to the voters. Should Karoui prevail in the runoff to be held in October, the judicial system will need to figure out how to handle a truly unique situation,” Yerkes continued.

Moreover, Yerkes highlighted that Tunisia is naturally entering a new era that is quite different from 2011.

“The political transition has made tremendous progress and many institutions operate effectively. However, the economy has not improved, thus many voters are looking for a candidate that can bring real and positive change to their lives,” Yerkes explained, adding that both candidates will need to prove to voters how they will do that.

“The election is another testament to the tremendous progress Tunisia has made toward consolidating its democratic transition. I witnessed enthusiastic voters and poll workers who took their jobs very seriously,” Yerkes, who observed the election, described the electoral scene in Tunisia.

Who is running off?

Kais Saied, a 61-year-old law professor and an expert on constitutional affairs, was endorsed and backed by Ennahda and Moncef Marzouki, former Tunisian president who was named by Tunisia’s Constituent Assembly following the 2010 Revolution.

Saied ran as an independent candidate. He is campaigning under the slogan “The people want”.

In an interview with Sky News Arabia, Saied asserted that he is ideologically independent, denying being the Islamists’ candidate. Saied also renewed his opposition toward granting Muslim women equal inheritance rights.

Tunisians, especially women, fear that big leaps made regarding their civil rights by Essebsi could be revoked after his death.

Essebsi took a brave move in August 2018 to support an unprecedented draft law which grants Muslim women equal inheritance rights, as the law was based on the Islamic Shariah where females only inherit half of the inheritance given to males. 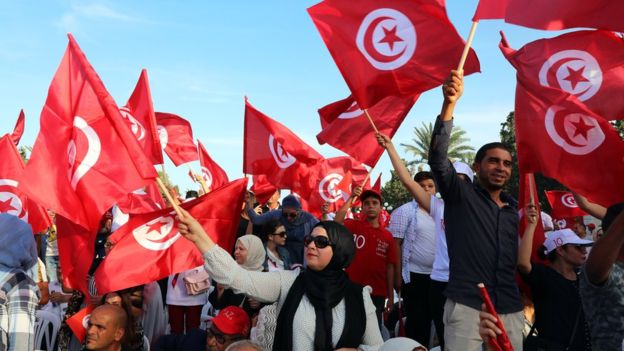 The second candidate is Nabil Karoui, the owner of the private Nessma TV channel and head of the Qalb Tounes (Heart of Tunisia) party.

Karoui was arrested just weeks before the vote over charges of money laundering and tax evasion which he denies. Although he is currently jailed pending investigation, Karoui still can run for president under the Tunisian Law.

Last Wednesday, a judge refused a request to release Karoui, saying it was not in his jurisdiction, according to the candidate’s lawyer. However, Tunisian authorities agreed on Friday to allow him to take part in the presidential debates in the runoff election. The state authorities said Karoui can partake in presential debates, whether from prison or he will be allowed to go to the state TV headquarters.

In an exclusive interview with French weekly magazine Le Point, Karoui accused the head of Tunisian government, who failed to head to the second round of the presidential election, Youssef Chahed and the Ennahda movement, of being behind his apprehension.

If he wins, Karoui pledged to be “a contemporary president” who would defend democracy and the rights of the minorities, adding that he “would wander the land to improve the living conditions of citizens.”

Karoui also promised to fight terrorism and bolster security in the country.