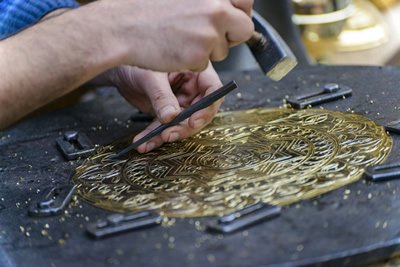 “I come from an extremely deprived background. My father used to be over the moon only when having a few kilos of flour, not to mention the rest of the food. I grew up always wondering, how come those artisans who bring the world some of its finest, most mesmerising handicrafts live such a cruel life, without life’s basic needs?!”  Shayeb Botrous, head of carpentering workshops of Higaza village in Qena, said while speaking about the struggles facing craftworks in Egypt.

Botrous’s speech came as a part of the conference, ‘Handicrafts in Egypt: Are We on The Right Track?’, which was held last week. The conference, which is organised by the Egyptian Centre For Economic Studies  (ECES), tackled the world of handmade products from all its aspects, featuring the tools of improving the handicrafts scene in Egypt through discussing the main struggles of artisans, the lack of proper equipment, funds, as well as the serious need of meeting global standards in order to force the Egyptian product into the global market.

“We are here to discuss whether we are on the right track or not. Let me clearly say: as handmade artists we no longer see any path. Most of us got lost in the dilemma of establishing a decent life for our kids, better than the one we grew up living, even if it means for many of us to step aside from the crafts of our ancestors,” Botrous added.

Botrous, discussed along with a number of handicraft owners the problems they witness as artisans in producing handicrafts that are about to be extinguished. Textile, gold, pottery, glass, candles, metals, stones, jewellery, rugs, and klims are among the handicrafts that were discussed at the conference that ended with applying a strategy for the government in order to enhance the situation of handmade crafts in Egypt.

Members of the Egyptian Export Council for Handicrafts and the Chamber of Handicrafts represented the government’s side of adopting the crafts, portraying their efforts in overcoming the challenges and the struggles the industry severely suffers from.

The estimated domestic market for handicrafts in Egypt was about EGP 3.3bn in 2017, according to a study by the Chamber of Handicrafts in 2018.

Throughout the discussion, Botrous expressed that as the owner of the biggest workshop producing wooden handicrafts in Higaza village, the lack of resources is the main challenge they face as craftsmen.

“We have no proper wood. We applied several times for the government to facilitate our wood import from South Africa, which is considered the best wood in the world, and it would not cost the government more than it does to import from regions like Asia and India. Still, we were met with no response–abandoned with  poor-quality wood that does not help us shape it properly,” he explained.

He further added that all the private support the village receives from entities is met with excessive orders of ownership. “For almost all of them, supporting us means requiring they own the designs, products, and exceeding our working hours to more than we can,” he added.

Explaining the reasons behind the massively reduced number of artisans in the wood handicraft sector, he highlighted that many of them became Tuktuk drivers as it guarantees them more money.

In the field of jewellery, Azza Fahmy, a leading silver designer, mentioned another struggle she continuously faces which is the lack of the historical statements of the designs.

“We have no reference of jewellery designs in Egypt. The ancient ones are not chronicled, which does not document any designs related to any decades,” she said.

The legendary designer established her own training school to enrol young talents, in order to help them have the proper training of gold and silver techniques.

“We lack qualified training schools, that bring to the world designers capable of producing well-shaped handicrafts that can compete with the international market in the quality, and the safety criteria,” she pointed out.

Fahmy asserted that so far, Egyptian designs and productions do not compete in international markets, compared to Africa and Asia.

All of the attending craftsmen agreed that the lack of proper marketing locally and regionally are key points behind the lack of increase of the numbers of sold handicrafts.

Almost all of the participating speakers asserted that they previously tried a number of times to have a showroom at the Cairo International airport but failed, as they found themselves “replaced with some less quality products exported from other countries that represent nothing of the Egyptian identity.”

Every year, the exhibition gathers thousands of artisans from all across Egypt in one place, allowing visitors to roam the governorates from north to south with the aim of promoting their work worldwide.

Creative Egypt is a permanent showroom for Egyptian handicrafts. Artisans of various productions have their creations on display in Cairo. It aims to provide craftsmen with sustainable development, and the opportunity to permanently showcase their products at the market which can afford to purchase them.

According to Creative Egypt’s spokesperson, Sahar El-Sokot, the store targets classes A and B who can afford the rather valuable products that are being sold for “reasonably pricey sums.”

Speaking of marketing Egyptian handicrafts regionally, Director of the Gerhart Centre (which focuses on philanthropy, civic engagement, and responsible business) at the American University in Cairo (AUC), Ali Awny, spoke about the main flaws facing the global promotion of Egyptian handmade crafts.

Awny explained that his work and research in the field revealed that the lack of marketing comes as people outside Egypt do not know about the story of the artisans who came up with the products.

“A huge part of selling these products, is selling the story of the people who made it. In handicrafts, the person who made the items is as important as the product itself. Their lives matter enough to be mentioned and written aside every item they manage to create,” Awny declared.

He highlights the importance of clearing the story behind the product whether from a heritage point of view or from the struggle and aspiration of the artisans behind it.

“When people know the details of the person who spent months of his life making the bedcover they are about to purchase, they appreciate it and would be willing to buy it no matter how expensive it is,” he asserted.

Throughout his speech, Awny explained that some of the known carpet makers in Iran spend all of their lives making between 15 to 20 carpets, “as every piece takes approximately five years, and some would reach up to 60!”. Yet, as expensive as they are, they all get sold right away as they their customers wait for them.

“We [Egyptians] fail to have our branding, which eases the marketing of the handicrafts,” he explained.

After hours of discussing the challenges of the crafts world in Egypt and methods to overcome them, the team of ECES came up with a number of proposals for the government to enhance the status quo.

Among the proposals was establishing an entity to legislate the laws to parliament, and monitor their application, and to manage the establishment of regular handicraft exhibits both inside and outside Egypt.

The proposals also included establishing an industrial neighbourhood equipped with all of the required equipment and needs for the craftsmen to produce their art work, as well as increasing the training programmes of the crafts and the craftsmen.