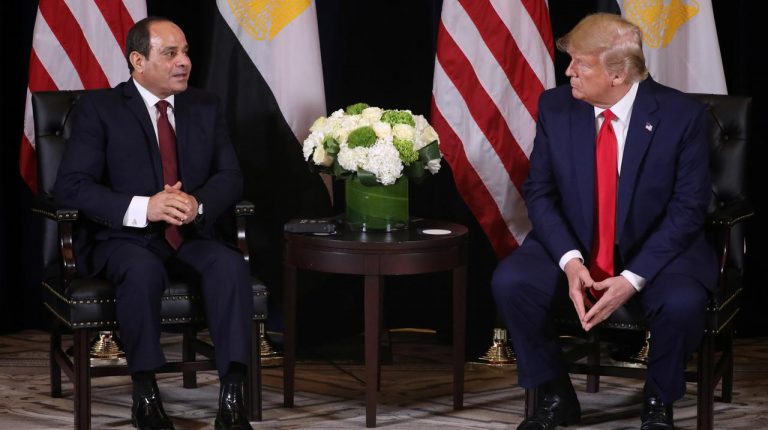 “As long as we have political Islam movements that aspire for power, our region will remain in a state of instability,” Egypt’s President Abdel Fattah Al-Sisi said during a Monday meeting with his US counterpart Donald Trump on the sidelines of the 74th session of the United Nations General Assembly (UNGA) in New York.

Al-Sisi was answering questions from reporters about the recent demonstrations which emerged last Friday night in Cairo and other cities.

Al-Sisi stressed that public opinion in Egypt will not accept political Islam to take power over the country, referring to the 30st of June uprising against the Muslim Brotherhood rule which lasted from 2012 to 2013.

When asked if he is worried about the recent demonstrations in Egypt, Trump answered, “Everybody has demonstrations. Even your best friend in the whole world, President [Barack] Obama, he had a lot of demonstrations.”

Trump also described Al-Sisi as “a real leader” who has brought order and stability to Egypt. “Before he [Al-Sisi] was here, there was very little order. There was chaos. So I’m not worried about that at all,” Trump continued.

“He [Al-Sisi] has done some things that are absolutely amazing in a short period of time. When he took over not so long ago, it [Egypt] was in turmoil. And it’s not in turmoil now,” Trump added.

On the other hand, President Al-Sisi is scheduled to deliver a speech on Tuesday at the UNGA 74. He is expected to address international peace, security maintenance, and combating extremism and terrorism, according to the Egyptian presidency.

Last Friday, small and scattered protests erupted in Cairo and other cities, including Alexandria, Damanhur, El-Mahalla El-Kubra, and Suez, calling for Al-Sisi to step down, responding to an online call by Egyptian contractor and actor Mohamed Ali.

Ali, who resides in Spain, has been posting videos on social media urging Egyptians to protest against the government, accusing the top officials in the country of “wasting the public funds on private megaprojects.”

The police responded by tear gas to disperse demonstrators, according to media reports. Videos were shared on Twitter and Facebook showing demonstrators gathering in central Cairo and chanting against the government.

Hundreds of protesters were reportedly arrested by the state security apparatus and the prosecution is currently investigating them over several charges, according to lawyers and non-governmental law centres. A few journalists were reportedly apprehended during their coverage of the protests.

However, the state authorities have not released any statements on the reported arrests.

Downtown Cairo, especially the Tahrir Square, has witnessed an intense security presence in the past days, as citizens have reported on social media that “security forces in plain clothing stopped people” randomly to “inspect their cell phones and their social media accounts.”

Following the demonstrations, several political parties and movements issued statements on the incidents.

The Civil Democratic Movement, a liberal political movement, called for a comprehensive national dialogue to address the recent protests in a manner that opens a path for peaceful democratic change, on Monday.

The movement also called for the release of political pre-trial prisoners as well as protesters who were arrested during the Friday demonstrations. It also urged the state authorities to “lift the blockade on some media websites,” and to carry out an independent investigation into the alleged corruption accusations.

Meanwhile, the Dostour, Arabic for Constitution, Party commented on the demonstrations and called on the security forces to respect the right of citizens to peaceful protest.

The party also urged the state authorities to free all protesters arrested during the Friday demonstrations and other “political prisoners.” It also called for “opening up the public sphere to political parties, civil society, and syndicates.”

Earlier, the National Progressive Unionist Party (Al-Tagammu) issued a statement to refuse what it described as “suspected and unaccountable” calls against the state.

The party asserted its stance to side with the government and the army against the “counter-revolution” represented by the outlawed Muslim Brotherhood.

Similarly, an alliance of around 40 Egyptian political parties denounced the calls to protest against Al-Sisi and the state, asserting that they stand behind the Egyptian army and police against terrorism.

On Saturday, the Coordination Committee of Party’s Youth Leaders and Politicians (CPYP) issued a statement on the protests and said that Egyptians proved that they are aware how “media outlets affiliated to terrorist groups” use modern technology in “falsifying truths.”

The CPYP added that the peaceful expression of opinion is a right constitutionally guaranteed, however, it emphasised the need to prevent “terrorist groups” from exploiting the freedom of speech to shake the stability and security of the country.