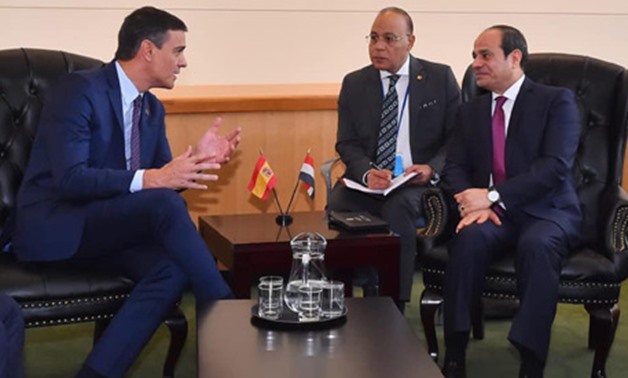 President Abdel Fattah Al-Sisi held separate meetings on Wednesday with heads of several states, during the third day of the 74th session of the United Nations General Assembly in New York.

Al-Sisi sat down with the Secretary-General of the United Nations(UN) António Guterres, as the two sides discussed counterterrorism efforts and ways to revive the Palestinian peace process, towards the goal of establish a Palestinian State with East Jerusalem as its capital.

The meeting also touched on the developments in the Middle East, especially the crises in Libya, Syria and Yemen, where they agreed to intensify joint work and international efforts to reach comprehensive political solutions, within the framework of preserving the national state and its institutions, to restore stability, and pave the way towards development.

In late Tuesday, Al-Sisi sat down with the British Prime Minister Boris Johnson and the Irish Prime Minister Leo Fradkar. The Egyptian president praised the strong cooperation and friendship between Egypt and the two countries, according to the presidency spokesperson Bassam Radi.

Egypt is keen on strengthening bilateral cooperation in various fields with the two countries, especially trade and tourism, in light of recent high-level visits by both sides to Egypt, Radi added.

Al-Sisi and Johnson also discussed fighting terrorism and extremism, through exchange of information, and drying up funding resources of terrorism.

During his extensive meeting spree, Al-Sisi also with his French counterpart Emmanuel Macron. During the meeting

French president affirmed the strong civilizational and cultural ties between the Egyptian and French peoples. The two leaders discussed ways of enhancing bilateral relations in a number of fields. They also tackled the Libyan crisis.

Then, President Al-Sisi met with his Lebanese counterpart Michel Aoun. During the meeting, Al-Sisi expressed Egypt’s support for the Lebanese government in meeting its people’s aspirations of progress, security, and peace.