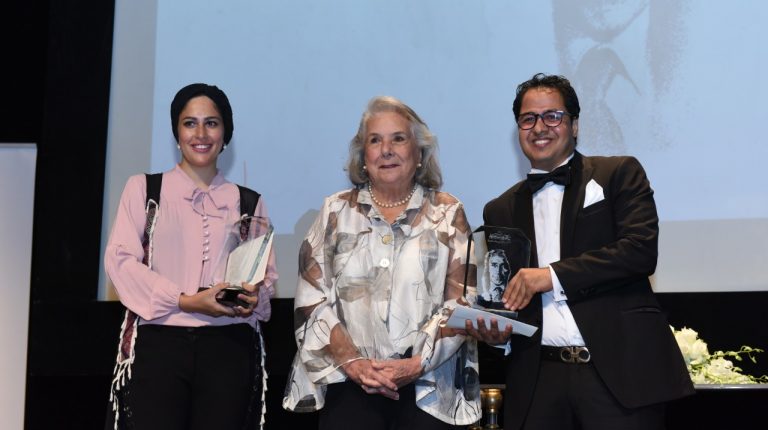 Years after his death, the memory of veteran Journalist Mohammed Hassanein Heikal still lives on. The Heikal Foundation for Arab Journalism celebrated on Monday the winners of the annual award ceremony, and the complete transfer of Heikal’s literary work, articles and office to the Bibliotheca Alexandrina to be on display to the public.

The annual award is given to young remarkable journalists for their achievements in the world of journalism.

The theatre of the Cairo Opera House was filled with Heikal’s students who grew up following his school of thought, and gaining from his knowledge.

Commemorating his 96th birthday, Egyptian media figures, along with public decision makers who shared with Heikal his political path, attended the ceremony.

Egyptian Journalists Rahma Diaa, and Ahmed El-Lithy were the two winners of this year’s awards for their enriching articles. Diaa is a freelance journalist, who published her work in a number of Arabic platforms, while El-Lithy is the head of the investigations section of the Egyptian popular news website, Masrawy.

In her speech, Heikal’s wife, and the Chairman of the Board of the Heikal Foundation, Hedayat Heikal, stated that since the establishment of the foundation, the number of Egyptian journalists who applied for the award has doubled, and the number of the Arab journalists increased by four times. 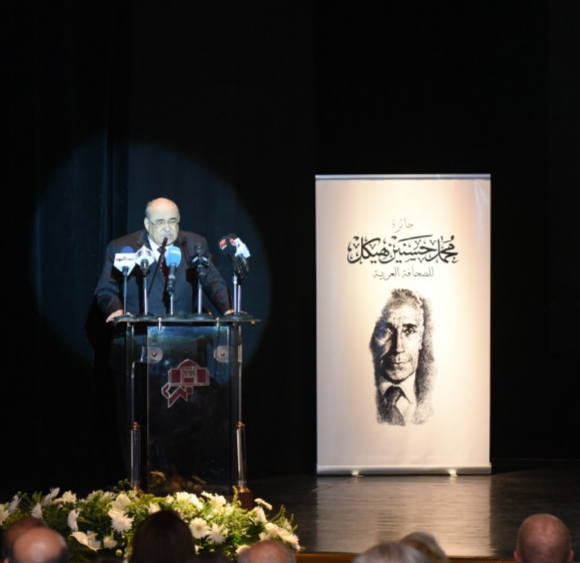 “I could not be prouder of how far we’ve come in just three years since the inception of this award, which not only celebrates Mr. Heikal, but cements his legacy of looking to the future of the press today through the hearts and minds of these brilliant young journalists,” she stated.

The Mohamed Hassanein Heikal Foundation for Arab Journalism was established in 2007 with a mandate to help young Arab journalists gain exposure to the latest trends on the international media scene, and provide technical support and training for journalists by engaging in dialogue and the exchange of ideas between media professionals in the region and abroad.

The Foundation began accepting applications for the competition from 1 March 2019; criteria included being an Arab journalist under the age of 40 and working at an Arabic language news outlet. The two awards, granted to two different winners, are worth EGP 250,000 each. It aims to provide young Arab journalists with the means and drive to enhance their skills, continue to excel in their profession, and reignite a passion for the field. In addition to its annual awards, the foundation provides grants for aspiring journalists to attend training workshops at leading global newspapers.

Heikal’s wife previously stated that the foundation presents “Heikal’s true belief that we must look to the future without forgetting the important lessons of the past. It is up to these talented young journalists to understand the past and take us to a better future.”

Heikal is one of Egypt’s most famous journalists, he spent more than 15 years of his professional career as the editor-in-chief of Egypt’s largest state news outlet Al-Ahram. His work is considered by many as a valuable source of the history of the modern Middle East. Dubbed Al-Ostaz [the master], his written speeches to Egypt’s late presidents Gamal Abdel Nasser, and Anwar Al-Sadat marked the announcements of the country’s most precious historical periods, including Abdel Nasser’s famous speech of nationalizing the Suez Canal in 1956. Egypt’s Minister of Social Solidarity Ghada Waly, appeared on a pre-recorded video celebrating the winners of the award for their achievements stating that they, with the help of Heikal Foundation “support journalism, which is a key profession in furthering the fabric of Egyptian society and contributing to building up Egyptian culture and youth.”

Displaying Heikal’s legacy to the public

The ceremony also celebrated the transfer of Heikal’s complete collection of articles, books, documents, manuscripts, rare documents, belongings, library, and office to the Library of Alexandria to be put on display for the public.

Director of the New Library of Alexandria Mostafa El-Feki, stated in his speech his thrill to the generosity of Heikal’s family, especially his wife, Hedayat, who “negotiated every single detail with the library to make sure that all of the late legend’s belongings are out for the maximum possible people to make use of them.”

“We are not only honored to be fulfilling the great writer’s wish, but to be giving the nation access to the legacy of Al-Ostaz, one of the most distinguished minds of our time,” El-Fikky said, adding, “these include close to 25,000 books, over 40,000 documents and manuscripts handwritten by Al-Ostaz himself, and rare maps and photographs that will be on display to the benefit of generations to come.”

The belongings are currently out at the library for the public to explore and study.