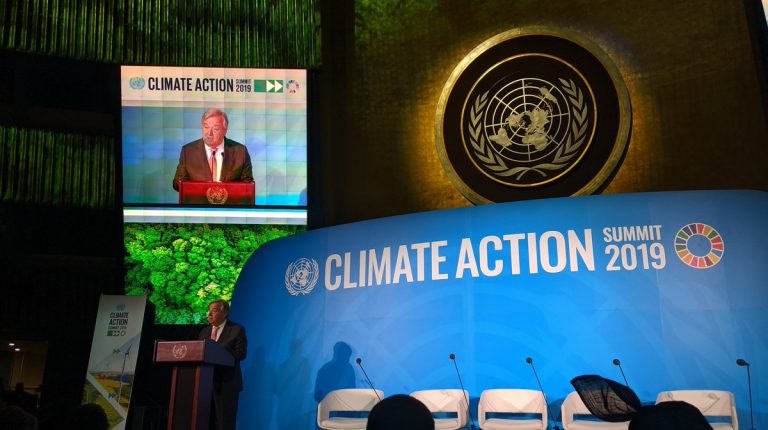 “You have stolen my dreams and my childhood with your empty words,” Thunberg told world leaders at the UN Climate Action Summit which was held on Monday at the UN Headquarters.

“People are suffering. People are dying. Entire ecosystems are collapsing. We are at the beginning of a mass extinction and all you can talk about is money and fairy tales of eternal economic growth – how dare you?!,” said Thunberg accusing world leaders of ignoring the scientific warnings behind the climate crisis.

“This is all wrong. I shouldn’t be up here. I should be back in school on the other side of the ocean.” Thunberg said.

Two weeks ago, Thunberg travelled for two weeks on a solar-powered sailboat to reach the United States for the summit. She led millions of young people in a climate strike on Friday in New York.

The UN Secretary General Antonio Guterres said that “nature is angry – and we fool ourselves if we think we can fool nature because nature always strikes back – and around the world, nature is striking back with fury.”

The secretary general demanded ending fossil fuel subsidies, saying “there is a cost to everything. But the biggest cost is doing nothing. The biggest cost is subsidising a dying fossil fuel industry, building more and more coal power plants and denying what is plain as day, that we are in a deep climate hole and to get out we must first stop digging.”

“The best science, according to the Intergovernmental Panel on Climate Change, tells us that any temperature rise above 1.5 degrees will lead to major and irreversible damage to the ecosystems that support us,” said Guterres.

Guterres further explained that the reason that governments are gathered in the summit is to show that they are serious about enhancing Nationally Determined Contributions (NDCs) under the Paris Agreement.

“Cities and businesses are here showing what leadership looks like, investing in a green future. Financial actors are here to scale-up action and deploy resources in fundamentally new and meaningful ways. Coalitions are here with partnerships and initiatives to move us closer to a resilient, carbon-neutral world by 2050,” he said.

In a message to the summit, Pope Francis told the attendees that: “While the situation is not good and the planet is suffering, the window of opportunity is still open despite everything. Let us not let it close. Let us open it with our determination.”

In his speech, French President Emmanuel Macron called on world leaders to include climate change in their trade and finance policies. He said that countries should not import goods that increase carbon pollution nor fund polluting plants in other countries.

Macron asked other nations to increase their pledges to the Green Climate Fund, in order to help poorer countries that are facing climate crises.

“We’ve seen the emotion this morning We cannot let our youth spend every Friday demonstrating for the climate and simply answer, everything is fine, we are doing everything right. We are still far from the account.” he said.

German Chancellor Angela Merkel stressed the need for countries to work together and follow the advice of science about climate change which she accused humans doubly for causing it.

In her speech before the summit Merkel said: “There are people who are active, and who demonstrate, and put pressure on us, but there are also doubters, and it is the duty of every government to bring everyone along. Germany is facing up to this task with our measures agreed last Friday.”

About 75 countries are enhancing their NDCs under the Paris Climate Agreement. The UN estimates that the world would need to increase its efforts between three- and five-fold to contain climate change to the levels dictated by science – a 1.5°C rise at most – and avoid escalating climate damage already taking place around the world.

During the summit, the President of Chile, Sebastián Piñera, announced the “Climate Ambition Alliance,” which Chile hopes to build in the lead-up to COP25 in Santiago. The Alliance brings together nations upscaling action by 2020, as well as those working toward achieving net zero CO2 emissions by 2050. 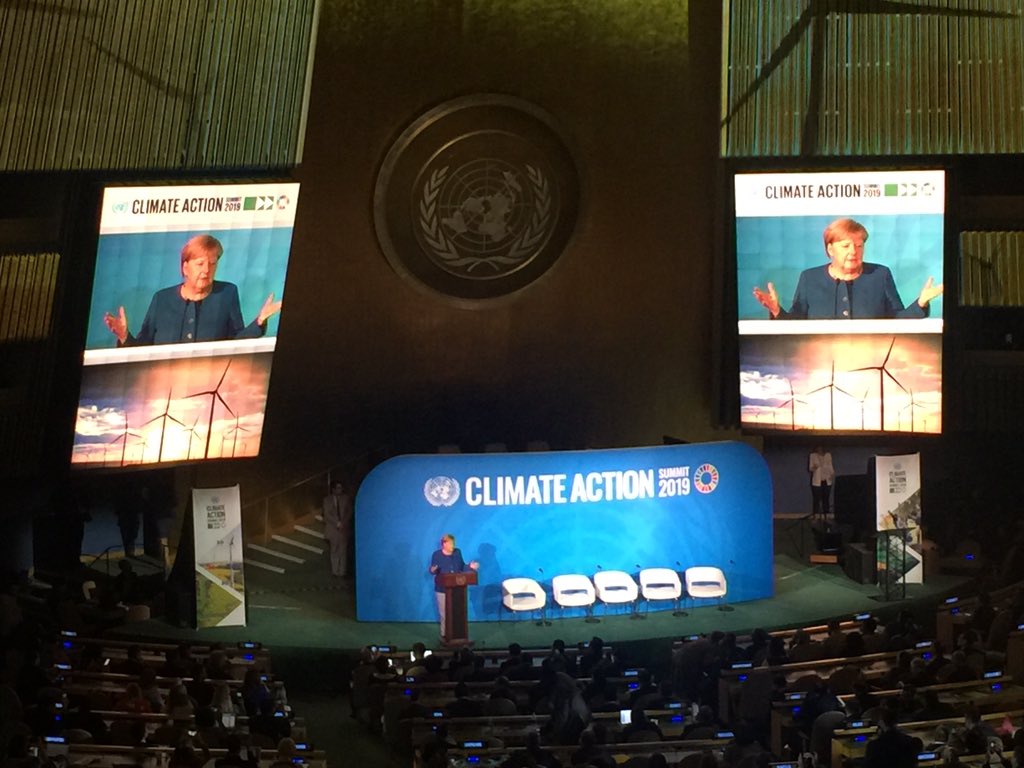 A number of 59 nations have signalled their intention to submit an enhanced climate action plan, and an additional nine nations have started an internal process to boost ambition and have this reflected in their national plans. In terms of the 2050 group, 66 governments are joined by 10 regions, 102 cities, 93 businesses and 12 investors – all committed to net zero CO2 emissions by 2050.

US President Donald Trump made an unexpected visit to the summit and stayed for about 15 minutes during the speeches of India’s Prime Minister Narendra Modi, and German Chancellor Angela Merkel.

“Ending coal use would be an enormous step forward in the fight against climate change and a huge victory for public health. We’re making progress – including in the US – where our foundation and the Sierra Club have teamed up to close more than half of all coal plants, and in Europe, where we’ve helped close some of the continent’s most polluting coal plants and encouraged more countries to commit to phasing out coal completely,” said Bloomberg.

He added: “we have to move faster, and we have a lot of work ahead of us – but there’s nothing we can’t achieve if all sectors of society work together. The Secretary-General has been a forceful advocate for ending coal use, and our foundation is glad to be working together with him and his team to reach that goal.”

Bloomberg called on private sector actors – particularly utility companies – to leverage their positions in their industries to lead a move away from coal.

According to a recent analysis by Bloomberg Intelligence of 64 of the largest utilities around the world, it revealed that while utilities worldwide are responding to investor and regulatory concerns over climate change by setting goals to reduce carbon dioxide emissions, they will fall short of the cuts needed to keep warming in line with the Paris Agreement.

“Utilities have a key role to play in shifting the economy away from fossil fuels and have incentives to take action, because their customers want cheaper, cleaner energy,” said Bloomberg.

He added that “better data helps show which utilities are leading the way, which helps to attract more investment in clean power and drives costs down further and faster.”

This story was published as part of Covering Climate Now, a global collaboration of more than 250 news outlets to strengthen coverage of the climate story, cofounded by The Nation and Columbia Journalism Review.