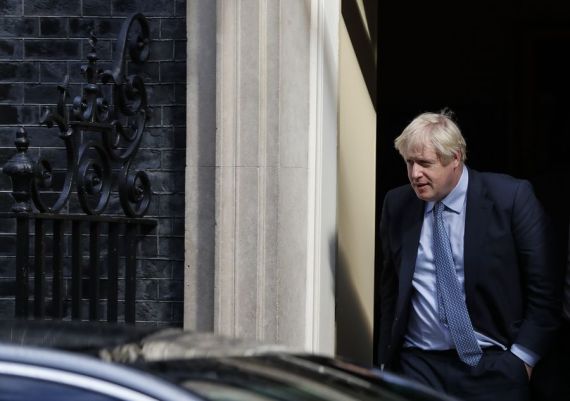 British Prime Minister Boris Johnson cut short his visit to a crucial UN general assembly summit in New York Tuesday to head back to London after judges ruled his shutdown of the Houses of Parliament was unlawful.

He is expected to face immediate demands to turn up at the House of Commons to address politicians after a day of high drama in the Supreme Court, the highest court in Britain.

Johnson was made aware before he left the U.S. of growing demands for him to quit 10 Downing Street after 11 of the country’s most senior judges ruled he was wrong to prorogue, or suspend parliament for five weeks.

They unanimously decided that Johnson’s advice to British monarch Queen Elizabeth II on proroguing parliament was unlawful, void and of no effect.

Legal experts had been anticipating a ruling that left Johnson with some wriggle room to escape the full wrath of the law. In the event the court decision could not have been worse for Johnson.

Within hours of the judges handing down their ruling, the Speaker of the House of Commons, John Bercow, announced parliament would re-open at 11:30 a.m. Wednesday, weeks before the scheduled State Opening by Queen Elizabeth on Oct. 14.

Johnson remained adamant that he will not resign in the wake of the court ruling despite demands for him to quit from almost every opposition party at Westminster.

As the world’s media zoomed in on the dramatic events in London, Johnson had been holding bi-lateral talks in New York with Brexit high on the agenda. He also addressed a meeting of business people in New York, promoting the idea of closer UK-U.S. links after Brexit.

Johnson also managed to raise laughs, saying at one point both countries spoke the same language, adding “more or less”.

Media in London reported that Johnson was asked at a meeting with U.S. President Donald Trump whether he should resign for misleading the British monarch. The U.S. president intervened and said: “I’ll tell you, I know him well, he’s not going anywhere.”

Johnson told reporters: “Let’s be absolutely clear. We respect the judiciary in our country, we respect the court. I disagree profoundly with what they had to say. I think it was entirely right to go ahead with a plan for a Queen’s speech. Frankly we need to get on with Brexit.”

Also in New York, Johnson met the Irish Prime Minister Leo Varadkar. Downing Street later issued a statement about the talks, saying Johnson and Varadkar discussed Brexit and the ideas that Britain has been putting forward.

“The prime minister was clear that the UK would be leaving on 31 October and said that he was cautiously optimistic that we would be able to do so through negotiating a deal which is acceptable to both sides,” added Downing Street.

On England’s south coast resort of Brighton, main opposition Labour leader Jeremy Corbyn brought forward his keynote speech from Wednesday to Tuesday to enable him to return to London for the re-opening of parliament.

Political commentators said Labour’s annual conference had got off to a bad start with squabbles over the party’s Brexit strategy.

Differences were put aside Tuesday as the conference went into overdrive following the court decision in London.

Corbyn was given a rousing reaction from the packed hall as he made his speech in which he called for Johnson to resign.

A spokesman for Corbyn said later that Labour would use every mechanism to bring about an early general election, but that a poll would be conditional on the government not using it to force a no-deal Brexit.■