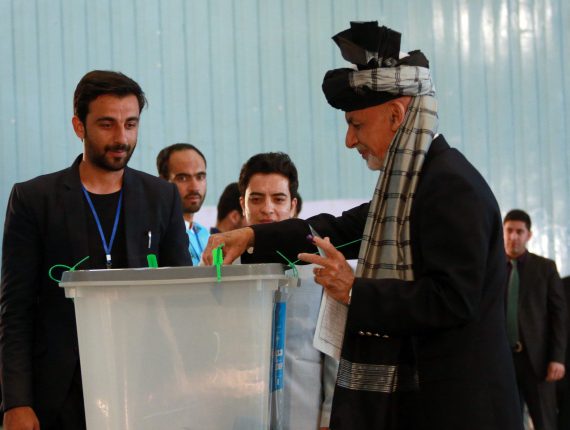 Afghans defied Taliban threats, casting their votes on Saturday in a one-day presidential election to select the country’s new leader for the next five years.

As polling has been continuing since early Saturday, Afghan voters stand in long queues outside polling centers in cities and villages amid Taliban threats and intimidation.

The polling opened at 7:00 am. local time (0230 GMT) and will continue uninterrupted till 3:00 pm. local time (1030 GMT) in the country’s 34 provinces, according to Afghan Independent Election Commission (IEC) officials. The election time is likely to be extended.

It is the fourth presidential election in Afghanistan since 2001, when the Taliban regime was ousted.

A total of 18 contesters were registered for the presidency with a five-year term and among the candidates are sitting President Mohammad Ashraf Ghani and government Chief Executive Abdullah Abdullah. However, four candidates have withdrawn from the race in favor of one candidate.

Ghani and Abdullah cast their votes at two different polling centers earlier in the day. They called on Afghans to take part in the process.

Afghan security forces will provide security for 4,942 out of 5,373 polling centers and the remaining 431 centers located in remote districts will not open on the election day due to security threats, according to election officials.

Security remains the biggest challenge for the election. The Taliban insurgent group has vowed to disrupt the election process. A number of security incidents were reported across the country.

In one incident, at least 15 people were wounded after an explosion occurred near a polling center in Kandahar city, capital of Kandahar province.

Meanwhile, the IEC has taken measures to ensure transparency during the polls as the past Afghan elections were allegedly marred with widespread irregularities and fraud.

The IEC will use biometric devices on the election day in order to avoid multiple votes and identify people involved in fraud.

Over 9.4 million eligible voters, 35% of them women, registered to cast their votes during Saturday’s polling.