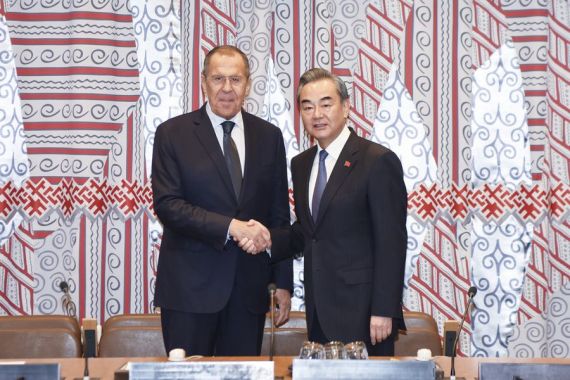 China and Russia should work together to implement the important consensuses reached by the two heads of state, enrich the comprehensive strategic partnership of coordination in the new era, push for more results in various fields of cooperation, and contribute more wisdom and solutions to world peace and stability, Wang said during their talks on the sidelines of the 74th session of the United Nations General Assembly.

Noting this year marks the 70th anniversary of the establishment of China-Russia diplomatic relations, Wang said bilateral ties are embracing new opportunities and faced with new challenges as well.

Under the current circumstances, China and Russia should continue to strengthen strategic coordination, safeguard national sovereignty and security, and oppose external interference, he said.

The two sides should firmly uphold the purposes and principles of the UN Charter and stand for international fairness and justice, so as to defend the respective interests of two countries, safeguard world peace and stability, and fulfill their due international responsibilities as permanent members of the UN Security Council.

Echoing Wang, Lavrov said his country is ready to have close communication with China and hold grand celebrations of the 70th anniversary of the establishment of diplomatic ties.

He said the two countries should step up strategic coordination in international and regional affairs and jointly uphold international law and the purposes and principles of the UN Charter.