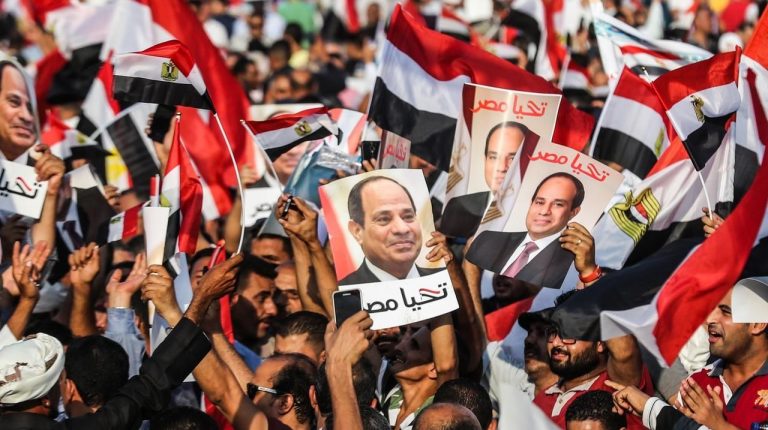 Thousands of Egyptians gathered in different cities across the country on Friday, to express their support for President Abdel Fattah Al-Sisi.

The protesters were carrying Egyptian flags and pictures of the president, chanting slogans to show support for Al-Sisi and the Armed Forces.

One of those rallies received the president upon his return from attending the 74th session of the United Nations General Assembly in New York at Cairo International Airport.

Al-Sisi commented on the call for protests, telling Egyptians “not to worry”, saying that “the country is powerful through its people.” Several media outlets also reported small anti-government protests in Cairo and upper Egypt on Friday.

The calls for protests on Friday were made by a contractor who fled to Spain before accusing President Al-Sisi’s administration of mismanaging public funds, without providing evidence.

Member of Parliament (MP) Ahmed Ismail, secretary of the Defence and National Security Committee of the House of Representatives, said that there were citizens who went to the streets to counter the war against the Egyptian state.

He also added that those calling for anti-demonstrations against the state are either very few and do not have the numbers, or have an agenda.

Chairperson of the State Information Service (SIS) Diaa Rashwan, said that Egypt has 900 foreign correspondents who are spread around the country to freely cover any events, in addition to 195 others who have photography licenses.

Rashwan, who is also the head of the Press Syndicate, said on Friday in an interview with Extra News TV channel that 15 reporters came to Egypt to cover the current events in particular, and the syndicate did not receive any complaints or reports of harassment expect one incident for two correspondents which were resolved immediately.

Last week, SIS called on international media outlets and their accredited correspondents in Cairo to abide by internationally recognised professional standards in their coverage of Egyptian affairs and news.