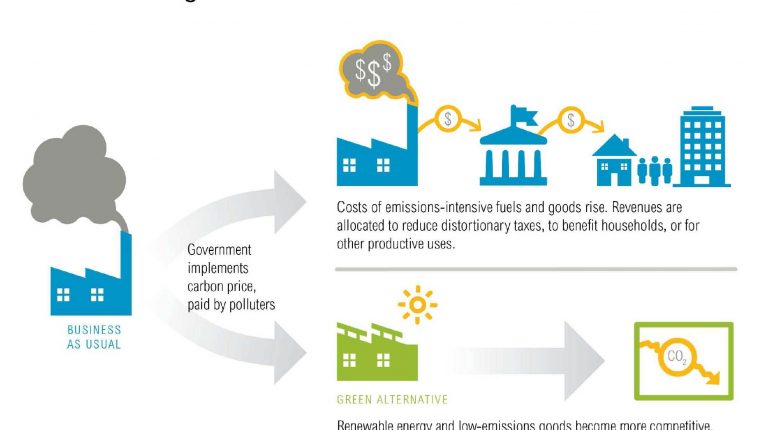 Carbon pricing is a tool aiming to reduce emissions by changing the relative costs of low-emissions products, high-emissions products, services, and production methods. Depending on the sector’s structure, this price may or may not be passed along to consumers, but can provide an incentive for both firms and consumers to reduce their costs by reducing their use of carbon-intensive goods and lowering emissions.

According to the report, carbon pricing can help accelerate and ensure a smooth transition to a low-carbon economy, when combined with other policies.

Taking into consideration that climate change poses a real threat to the world’s industries and economies, it needs to be addressed as a matter of urgency. Thus, the report indicates that a cost-effective transition to a net zero-carbon economy by the middle of the century is important to avoid the most severe impacts without sacrificing the economies’ productivity.

The High-Level Commission on Carbon Pricing and Competitiveness is a group of business leaders and other eminent leaders from the public sector and academia convened by the Carbon Pricing Leadership Coalition (CPLC), and is supported by the staff of the International Bank for Reconstruction and Development, International Development Association, and International Finance Corporation (the World Bank Group).

The group concluded that carbon pricing would drive a shift away from high-emission products to low-emissions products and processes. However, the report said that some firms that compete against these low-emissions substitutes may experience a loss of market share and reduced profits even as others adapt, increase their profitability, and develop new business models.

Carbon leakage risk exists, but it shouldn’t be exaggerated

The biggest obstacle that might face such policy would be the potential risk that high-carbon economic activity may move to regions without a carbon price, the report found out, due to differential carbon prices between jurisdiction.

“This could result in decreased profits and job losses. It could also exacerbate political push-back and undermine the intended environmental outcome of reduced GHG emissions. If this “carbon leakage” occurs, it would be a lose-lose: a loss of competitiveness or economic activity without an environmental gain,” the report indicated.

Furthermore, the report downplays that carbon pricing would result in the relocation of the

production of goods, services, or investment to other countries, due to the lack of evidence to date. There may be several reasons for this, including the observation that carbon price levels have generally been moderate and existing programmes include protection for at-risk sectors.

Besides, tax rates, labour availability, and infrastructure may be more significant to investment decisions regarding the location of production than environmental regulations.

While competitiveness remains a key concern for policymakers considering a price on carbon, these concerns should not be overstated, the report stresses. Additionally, it indicates that competitive risks exist primarily for high emissions-intensive and trade-exposed (EITE) sectors and jurisdictions that

depend on such sectors.

Accordingly, these risks can and should be addressed through a suite of locally tailored policy design choices intended to protect the industry from the unfair international competition, even as they ensure that the incentive and support for low-carbon innovation remains.

term, where rates of return on capital are impacted and investors/firms choose to relocate their investments and their capital to countries with less stringent climate policies and/or lower carbon prices

However, the commission believes that there are a variety of options to address competitiveness risks, including free allocation of emission rights and border measures. However, these should be based on a location-specific, data-driven evaluation of impacts. Once implemented, these measures should be

periodically reevaluated to ensure their effectiveness and usefulness.

The report believes that as ambition levels increase to meet the goals of the Paris Agreement, two countervailing effects may be relevant for competitiveness impacts.

First of which, as ambition increase, higher carbon price levels may be adopted, leading to the potential for more significant competitiveness impacts for EITE industries.

On the other hand, as more countries adopt climate policies and develop linkages between carbon markets, differences in carbon prices among countries and regions should become smaller, alleviating competitiveness concerns.

Furthermore, the commission concluded that concerns over competitiveness implications should not preclude carbon pricing or keep regions from increasing carbon prices or emission targets over time to levels needed to implement the Paris Agreement. “For example, as set out in the Stern-Stiglitz report (CPLC 2017), namely $40–$80/ tonnes of CO2 emissions (tCO2e) by 2020 and $50–$100/tCO2e by 2030,” the report said.

Finally, the report indicates that carbon pricing, along with complementary measures, can also drive innovation, investment, and substantial growth in some sectors. The investment opportunities that

arise from decarbonisation are considerable, according to the report, as is the potential for the development of new industries and innovation within existing ones.

“Innovation and investment, as well as stable and predictable policies, are crucial to the transition to a low-carbon economy. Policy clarity, with a strong governmental commitment to a meaningful policy which increases in stringency over time, can help ensure that companies and regions remain competitive in global markets. Furthermore, large mainstream investors are increasingly factoring in the development and implementation of low-carbon strategies when evaluating their portfolios,” the report concluded.

What you need to know about climate change