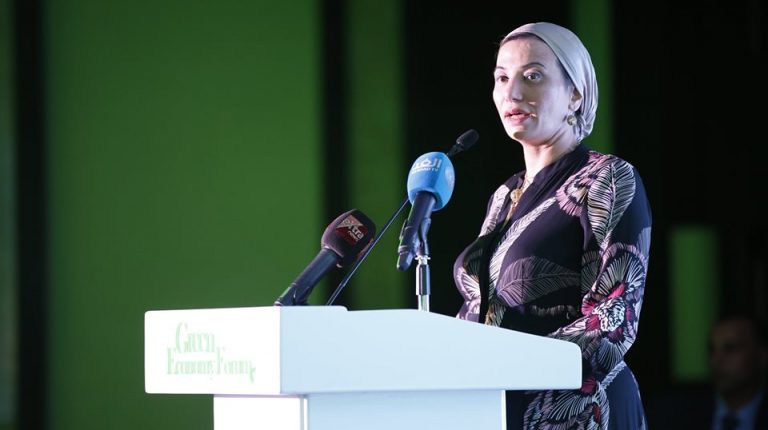 Egypt is launching its first application for monitoring the environmental cleanliness in a few neighborhoods of Cairo on Monday, according to the Minister of Environment Yasmine Fouad.

Fouad’s remarks came during “The Transformation toward Green Economy” conference, which was held on Sunday in Cairo.

The conference, held under the patronage of the Ministry of Environment, the Ministry of Trade and Industry, and the Ministry of Communication and Information Technology, was attended by policy makers, businesspeople, and representatives of international organisations, civil society, and youth.

During the conference, the ministry stressed on the importance of having the green economy.

Notably, the green economy is defined as an economy that aims at reducing environmental risks and ecological scarcities, and one that aims for sustainable development without degrading the environment. It is closely related with ecological economics, but has a more politically applied focus.

The minister also stressed the importance of having integrated decision policy, that integrates all categories including women, youth, different ministries, as well as civil associations.

In that context, the minister noted that the aforementioned application is done in cooperation with the youth.

The minister proposed suggestions for the private sector in Egypt in order to achieve the sustainable development and the green economy, including investments in the natural reserves, mentioning that the ministry has provided the infrastructure for 13 natural reserves in Egypt.

She referred to the ministry`s efforts in achieving a green economy and sustainable development, mentioning that the ministry has worked on three axis, including updating policies, regulations, laws, as well as launching a new unified law for the environment.

Minister Fouad asserted the need for a decisive and definite shift towards a green economy, which has become a global trend and is no longer an optional requirement. Environmental protection has become a necessary and urgent in order to reduce environmental degradation, which has reached unprecedented levels globally, including depletion of natural resources, climate change, desertification, water insecurity, and food security which has been reflected in real environmental crises and challenges.

The Minister of Environment said that Egypt is seeking, through her ministry in cooperation with other agencies, to implement the United Nation’s 2030 Agenda for Sustainable Development, pointing to three key sectors in Egypt, energy, waste, and natural reserves.

The minister stressed that achieving sustainable development through an economic model gives priority to investment in human and natural capital.

Can India be cleaned?