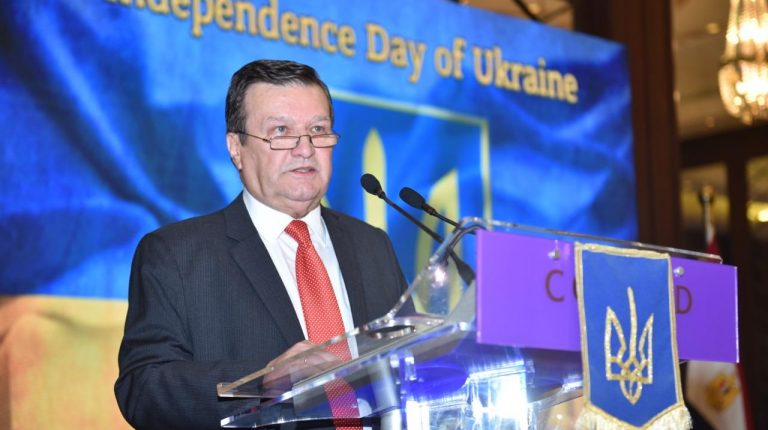 Ukraine is ready and able to guarantee the food security of Egypt in a very effective manner and within very limited timeframes, the Ukrainian ambassador to Egypt, Yevhen Mykytenko, said last Thursday evening. “We are known as a breadbasket of Europe,” he added proudly.

This came during the embassy’s celebration of the 28th anniversary of the Independence of Ukraine on 26 September.

“Both countries are moving very well. After free and democratic elections this summer, Ukraine now has the new President Volodymyr Zelensky, a new Parliament, and a new government,” he stated, emphasising the role of hard work in achieving good results.

It has been 28 years since Ukraine started its ongoing movement through a thorny path from communist totalitarian regime, “wild capitalism,” and social confusion to an open-market economy, striving to build a democratic state with educated, free, and self-governed civil society, Mykytenko said.

Moving to the Egyptian reforms, the ambassador stated that Egypt is also moving within great and speedy reforms guided by President Abdel Fattah Al-Sisi and his government.

Trade exchange between Egypt and Ukraine exceeded $1.5bn in the first eight months of 2019, according to Mykytenko. “The trade record sounds promising, but it’s still a bit far from both sides’ ambitions and potential,” he added.

With regards to the energy sector, the Ukrainian-Egyptian cooperation can also play an important role in preserving energy security of Egypt and the European countries, the ambassador asserted.

During the last 10 years, Ukraine has invested more than $400m in Egypt’s energy sector,  Mykytenko added.

“We do believe, and we are doing everything possible, to ensure that the upcoming year will be blessed by high official visits between our countries,” he said.

On that note, Mykytenko mentioned that Ukraine welcomes Egyptian companies involved in investment projects in Ukraine’s different areas such as energy, hospitality, and telecommunication.

“It is important to mention that humanitarian ties between Ukraine and Egypt are also accelerating,” the ambassador added.

More than 3,000 Egyptians study at Ukrainian universities, the ambassador said, adding, “my country is the second state, after Germany, in terms of the number of tourists visiting Egypt. Last year, more than 1.2 million Ukrainians visited Egypt.”

The ambassador asserted the importance of Ukraine’s President Volodymyr Zelensky meeting with President Abdel Fattah Al-Sisi on the sidelines of the United Nations General Assembly in New York recently.