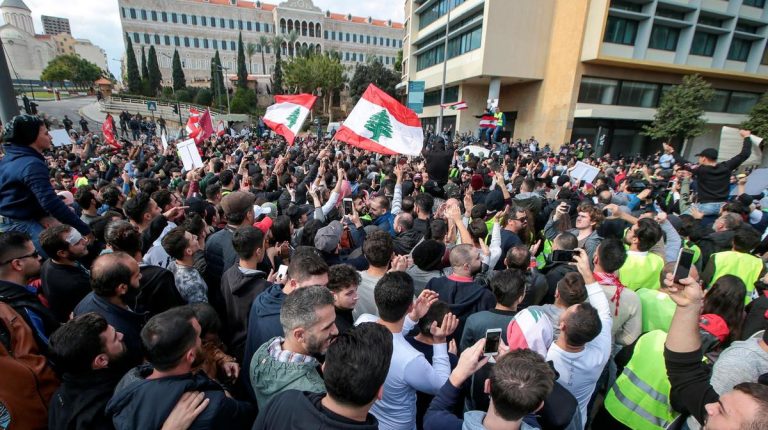 Hundreds of Lebanese took to the streets of Beirut on Sunday to protest against their difficult living conditions and the deteriorating economic situation in the country.

The Lebanese movement is part of a series of protests in different Arab countries against worsening economic situation.

Lebanon was hit over the past two weeks with a big devaluation wave of its local currency, marking the first time in two decades the Lebanese pound has slid, leading activists and civil society to call for demonstrations.

Lebanon is facing a deep-running fiscal crisis as it staggers under one of the highest debt ratios in the world, amounting to $86bn, representing 150% of the country’s GDP.

Protesters gathered in Martyrs’ Square, Beirut, then marched towards Banks Street and Riad El Solh Square in downtown until they reached the cabinet’s headquarters, and tried to break into security checkpoints where riot police were stationed, causing some protesters to withdraw.

However, the protesters persisted and entered the government building, crossing barricades and barbed wire. There were instances of clashes between police and protesters.

Dozens of other protesters closed major roads in the capital with burning tires and barriers causing traffic jams. The state-run National News Agency reported that angry protesters briefly closed the road in the eastern town of Masnaa that leads to the Syrian capital of Damascus. The agency also reported road closures in the north-eastern regions of Baalbek and Hermel. There were also protests in the northern city of Tripoli and the southern city of Sidon.

The protesters blamed Lebanese political leaders for the failure of managing the country and for corruption, and chanted “people want to overthrow the regime,” a slogan that was echoed throughout the so-called Arab Spring uprisings in 2011. Other chanted “peaceful” and tried to stop youths who clashed with security forces.

Despite the tens of billions of dollars spent after the 15-year civil war in 1990, Lebanon still has crumbling infrastructure including daily hours-long electricity cuts, trash piles in the streets and often sporadic, limited water supplies from the state-owned water company.

Last week, the local currency reached LBP 1,650 per US dollar at currency exchange shops after it had been stable at LBP 1,500 per US dollar since 1997, according to AFP. Although the official price is still pegged at LFP 1,500, people find it difficult to get hard currency at this rate from local banks.

Moreover, there have been complaints by importers of fuel, medicine, and wheat, saying they suffer a severe shortage of hard currency. As a result, people are standing in long queues at gas stations in order to fill their cars.

Banque du Liban is scheduled to issue instructions on Tuesday to regulate financing imports of fuel, medicine, and wheat.

Maha Yahya, director of the Carnegie Middle East Center in Beirut, said Sunday’s protests were only the tip of the iceberg. “It is a reflection of the pent-up anxiety we feel at all levels.”

Heavily indebted Lebanon is facing financial woes stemming from a slowdown in capital flows needed to finance the government and an import-dependent economy.

The shrinking remittances of Lebanese nationals working abroad has also put pressure on the Central Bank of Lebanon’s foreign currency reserves. During a Climate conference in Paris last year, Lebanon received pledges of $11bn for investments from Paris related to delayed reforms aimed at putting fiscal development on a sustainable path. However, Lebanon has yet to receive the funds pledged by France and other donor countries and institutions at the conference.