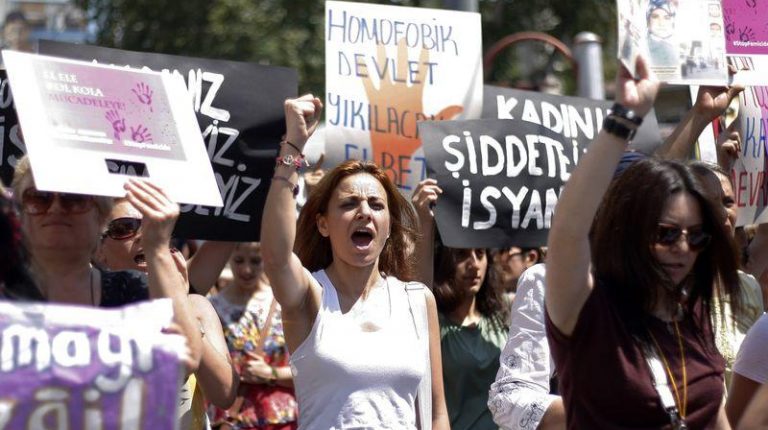 Women have recently shown great strength and enthusiasm when contributing to change in their countries and speaking up against abuses and violations to their rights. The have learned how to reject repression and violence.

On Saturday, hundreds of Turkish women took to the streets of Istanbul to denounce rising violence against women and the government’s failure to stop brutal abuses across the country.

They gathered in Kadikoy neighborhood on the Asian side of Istanbul, repeating chants, like “Stop the murder of women!”, “Stop male violence!”, and “Do not ignore violence! Do something!”. They highlighted various harsh stories of women who have been recently murdered across the country.

One of these cases was Emine Bulut, 38, who was killed by her ex-husband in August in front of her daughter in a coffee shop. The murder was filmed by the coffee shop’s surveillance cameras and the video was circulated online, sparking great outrage among Turkish women.

Bulut, who got divorce four years ago, captured the world’s attention and her name became a trending topic on Twitter along with the hashtag “I don’t want to die”.

“The murder of Emine Bulut sparked frustration and resentment in society. Her last words are echoing in every woman’s ears (I don’t want to die),” Gamze Ozturk, one of the protest’s organisers, told AFP. “There are increasing numbers of women being murdered and none of them wanted to die,” she said.

Other tragic stories included Emine Dirican, a beautician from Istanbul, who survived a murder attempt by her husband. She told reporters that her husband always objected her work and even leaving the house without his chaperoning. Dirican’s husband was convicted of assault and was released pending final verdict.

As her husband is free until his next hearing in October, Dirican rarely leaves her parents’ house. She gets terrified when hearing other stories of women being killed by their husbands.

A total of 294 women were murdered in only eight months of this year, of whom 40 was killed in August alone, while 440 women were killed last year, according to a women’s rights group, called “We Will Stop Femicide”, which has been tracking gender-related deaths.

We Will Stop Femicide has been working on this longstanding issue since the Turkish authorities stopped doing so in 2009. It was widely considered the most credible source reporting cases of violence against women, they get their information data from news stories and letters of families of victims.

According to the group, 2,600 women have been murdered since 2010, most of them by their partners.

“Men can’t accept that Turkey is a modern country where women have rights,” says Fidan Ataselim, the group’s general-secretary. “Some of these men don’t even think we have the right to live.”

“The government ignores the problem because they’re complicit,” she says. “Politicians imply that men and women are not equal, that women are given by God to man to care for. They want a family controlled by men, where everyone in the family obeys men.”

Moreover, Ozlem Ozkan, also in Istanbul, said that “Women who have been beaten go to the police and are told, “don’t file a complaint, it will just make your husband angry,” she says. “I’ve heard with my own ears lawyers telling women who have survived domestic violence, ‘Well, maybe you just want a divorce because you have a lover.’ “

Despite Turkey being one of the first countries to ratify the Council of Europe’s 2011 Istanbul Convention on preventing domestic violence, women activists still believe that more effort is needed to put laws into practice.

“We will continue to be out on the streets to protect women’s rights until no single woman is killed,” protester Bircan Sahin told AFP.

Also, in Ramallah, this week, hundreds of Palestinian women protested against gender-based violence and oppression against women. The protest mainly came after the brutal killing of 21-year-old Israa Gharib by members of her family last month.

According to official figures, 28 women, including young women, have already been killed this year, while last year, only 35 Palestinian women were murdered.

The demonstrations took place in various cities, Haifa, Ramallah, Gaza, and Nazareth in Palestine, as well as Beirut and Berlin.