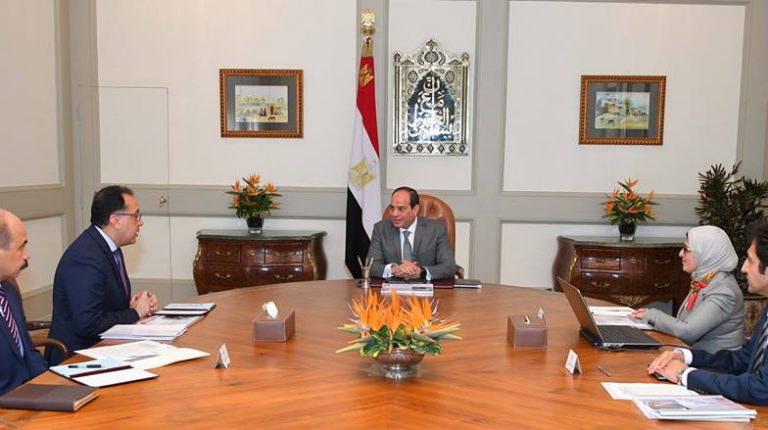 President Abdel-Fattah Al-Sisi ordered on Monday the accurate implementation of a comprehensive health insurance system in order to provide high-quality services to Egyptians, according to the presidency’s statement on Tuesday.

His statements came during a meeting with Health Minister Hala Zayed and Minister of Higher Education Khaled Abdel Ghaffar.

The meeting reviewed executive steps taken by the ministry to apply the comprehensive health insurance system in Port Said governorate, and improve the quality of professional medical education. The president also stressed that the state gives high priority to the medical care sector.

For her part, Zayed said the comprehensive health insurance system was launched at seven hospitals and 26 health centres in Port Said, and that a total of 506,000 citizens have been registered in the system.

She also reviewed preparations for applying the health insurance system in other governorates, including Ismailia, Suez, South Sinai, Luxor, and Aswan.

During the meeting, Zayed noted that her ministry went into partnership with international educational institutions, including the Royal College of Physicians and Harvard University, to give a push to professional medical education.

In 1 September, Egyptian Ministry of Health announced the implementation of the new system in the governorate of Port Said to offer better health services to citizens.

The governorate will be the first to benefit from the new system through seven general hospitals, four medical centres, and 25 healthcare units. The new system will cover all governorates by 2032.