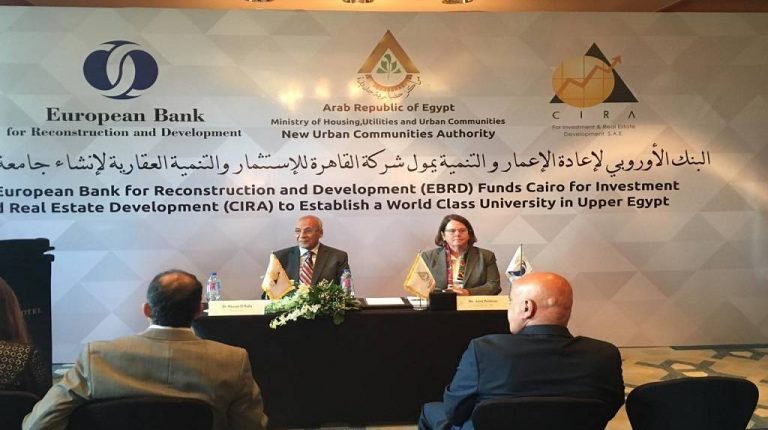 The European Bank for Development and Reconstruction (EBRD) is supporting Cairo for Investment and Real Estate Development (CIRA) to establish a world class university in west of Assiut’s Nasser with €25m.

CIRA, represented by the Chairperson Hassan El-Kalla signed the funding agreement with EBRD’s Managing Director for Southern and Eastern Mediterranean (SEMED) Janet Heckman, according to a statement of the bank on Tuesday.

The fund will be conducted and repaid using Egyptian pound, according to  the statement, noting that the university will be designed and built according to

international standards in order to become a cultural and educational center in Upper Egypt, with the support of the Housing and Urban Development Authority.

EBRD will mobilise grant funding for an amount up to €400,000 to support the implementation of innovative sustainable design features and technologies including energy, water, and material efficiency in accordance with Green Building standards and certification.

During the event, CIRA announced its extended support to the Urban Communities Authority’s efforts in developing Nasser City in Upper Egypt by providing the full payment for the total price of land to further support and accelerate its development.

approximately 100,. The new university will have four faculties as a first phase of the project and will introduce new modern learning programmes in disciplines.

The EBRD is placing a very high priority to ensure that the new premises are environmentally friendly. It will dedicate 30% of the investment to green economy financing and will work with developers on solar generation technology installation.

The EBRD will work to ensure that the building is recognised for meeting environmental standards, such as silver certification under the Leadership in Energy and Environmental Design (LEED) rating system.

The EBRD’s support for this project comes from its belief in the importance of the role of development in Egypt. Through the development of educational services, the government can serve a wider segment of Egyptian society to create a generation capable of meeting the needs of the labour market.

CIRA is a joint stock company incorporated in Egypt and listed on the Egyptian Exchange with a market capitalisation of €440m as of 30 September 2019.