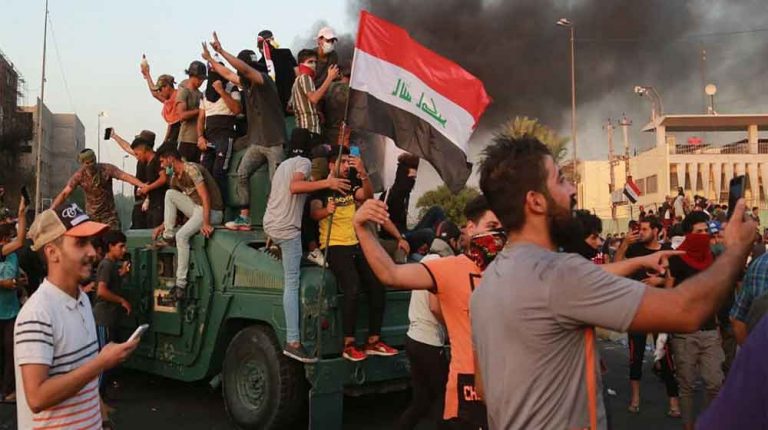 A total of 100 people were killed and around 4,000 were injured during the fifth day of anti-government demonstrations in Iraq, according to a member of the Iraqi Independent High Commission for Human Rights (IHCHR) Ali Akramِ Al-Bayati on Saturday.

On Saturday Morning, Iraqi parliament failed to hold an emergency session. However, the speaker of parliament will meet representatives from the demonstrators and political parties at the parliament’s headquarter in order to listen to their demands.

He also stated that if leadership is seeking to ensure “free and fair elections with wide popular participation,” they should first show their credibility and seriousness and respond to people’s calls for reform.

Curfews and internet blockages have been imposed in several parts of the country, while clashes between protesters and security forces have turned violent in other cities.

Shia Cleric Muqtada Al-Sadr commented on calls of protesters in a brief written statement on Friday, after the fourth day of protests across the country in which dozens have been reportedly killed. “The government should resign and early elections should be held under UN supervision,” he said.

Al-Sadr earlier urged lawmakers to suspend their parliamentary membership and boycott sessions until the government presents a program that is accepted by the people.

In a speech on Friday, the Iraqi Prime Minister Adel Abdul-Mahdi confirmed the legitimacy of the demands of the demonstrators saying,  “your voice is heard before you demonstrate and your demands to fight corruption and comprehensive reform are right.” Yet, he stressed the need to respect the rule of law and maintain security and stability at the same time.

Thousands have taken to the streets in several Iraqi provinces since Tuesday demanding jobs, improvements to electricity, water, and other services, and an end to corruption in the oil-rich nation.