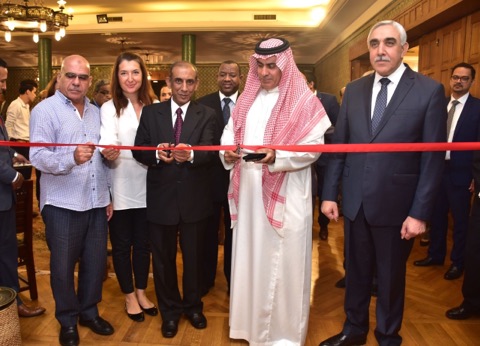 While the world submerges into the floods of violence, holding on to the memory of those who took peace, a life aspect, people can remind themselves and the world that there is always another way to show resilience and to fight injustice. Indian philosopher and spiritual mentor Gandhi was one of the pillars of peace which allowed for his name to stay alive decades after death.

Celebrating his 150th birthday, which also marks the world’s International Day of Non-Violence, the Indian Embassy in Egypt held an exhibition at the halls of the League of Arab States which highlighted the life of Gandhi.

The event, which was held on Wednesday, was attended by Ahmed Aboul Gheit, the Secretary-General of League of Arab States, Mohammed Salmawy, the former President of the Writers Union, and Ambassador Khaled Al-Habbas, the Assistant Secretary-General for International Political Affairs for the League of Arab States, as well as ambassadors of countries.

In a round table, the veteran politicians spoke of Gandhi’s life perspective and the importance of placing them against the compiled armed conflicts currently taking place in several countries around the world.

The event is the last of a-year-long series of cultural events that took place around the world to celebrate Gandhi’s 150th anniversary.

“The event itself is important. But also holding in at the headquarters of the League of Arab States is also reflective of a storing relationship with the League and the Arab world,” Indian ambassador to Egypt, Rahul Kulshreshth, told Daily News Egypt.

“A year ago, we launched celebrations in Egypt for Mahatma’s 150th birth anniversary. It is fitting that we cap these celebrations with this event at the League of Arab States,” he added.

In his speech, Kulshreshth said that “a towering personality of modern times, Mohandas Karamchand Gandhi, venerably called Mahatma, or great soul, changed the tide of events and left an indelible imprint on history. He achieved freedom for India from the clutches of colonialism, armed with nothing but nonviolence.”

He added that Mahatma Gandhi’s place in history is marked not only as of the man who led India’s freedom struggle, he was also an equally proud and passionate internationalist.

Aboul Gheit concluded the event with his speech, in which he stated that Gandhi was an icon for “peaceful resilience, and became a mentor for the whole world to learn from.”

“this great man believed in the huge power of non-violence, and taught the whole world that negative resilience does not mean surrendering to reality but means refusing the occupation, yet with the refusal of the bloodletting, which was proven to be a successful philosophy that overcame the strongest empire the world recognised at the time,” Aboul Gheit added.