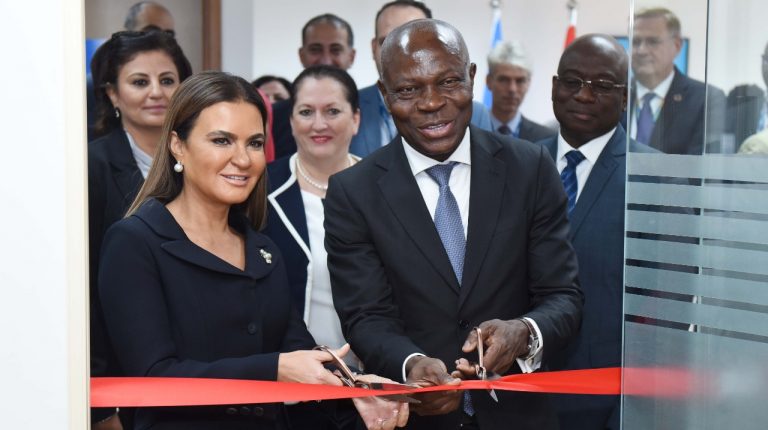 Al-Sisi expressed Egypt’s appreciation for the fund’s support for development projects in the country for decades, stressing the importance of the IFAD as a partner in the eradication of poverty in rural communities and raising the standard of living.

Accordingly, Al-Sisi welcomed the opening of the IFAD headquarters in Egypt, stressing his aspiration to work with the IFAD to transform Egypt into a regional centre for managing agricultural development.

“The inauguration of the office came after years of joint work with the IFAD for improving the lives of citizens, especially in the rural areas,” Nasr commented, noting that the office will contribute to increasing cooperation between Egypt over the coming period.

IFAD’s new office will accelerate the speed of the fund’s response to the priorities of integrated agricultural development in Egypt, especially in the neediest governorates, support small investors in the field of agriculture, as well as empower young people and innovative projects, Nasr asserted.

Inaugurating IFAD’s regional office in Egypt is due to the country’s leading role in the Arab region and the African continent, she said, noting that the office will strengthen international expert knowledge about the needs and challenges of farmers and consumers in the region.

“This office is a strategic center serving IFAD’s role as a rural development agency working on reducing poverty, empowering women and youth as well as creating employment in the region,” mentioned Houngbo.

Cairo’s hosting of IFAD’s first regional office will provide technical support to farmers in the Arab region, especially in countries that have experienced conflicts such as Syria, in line with Egypt’s external policy to support the reconstruction of countries affected by conflict, added Houngbo.

Notably, IFAD began operations in Egypt in 1977, and so far has implemented 14 projects, investing nearly $520m and directly benefitting approximately 1.2 million households. Currently, the ongoing portfolio comprises three projects for a total of about $300m while an agreement for a fourth investment project worth $80m has been recently signed