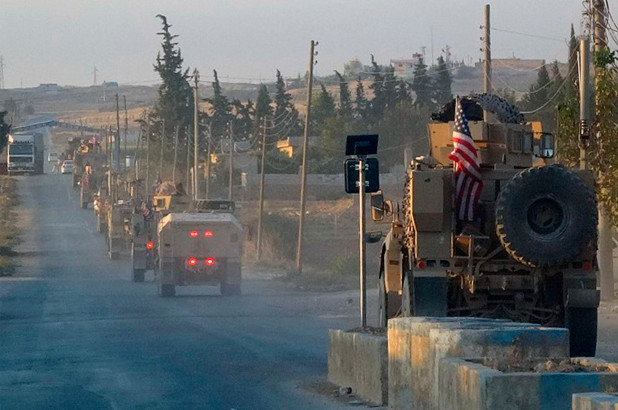 In a major shift in United States (US) policy, the US gave Turkey the green light to go ahead with its military operation in northern Syria. The White House announced Sunday evening that US armed forces will not participate or intervene while Turkey launches its “long-planned” operation there.

The White House said in a statement that after the defeat of ISIS, the US armed forces will no longer be stationed in the Syrian-Turkish border region, and will not engage in the forthcoming Turkish military operation, adding that “Turkey will now be responsible for all ISIS fighters arrested in the last two years,” Reuters reported.

The latest developments came after Turkish President Recep Tayyip Erdogan telephoned his US counterpart Donald Trump to discuss the “safe zone” planned to be established east of the Euphrates River in Syria, as well as a number of bilateral issues.

Erdogan assured Trump that the establishment of Safe Zone is a condition for eliminating what he called The Kurdistan Workers’ Party (PKK) terrorist threat and for paving the way to the return of Syrian refugees.

The Turkish president also stressed that his country is determined continuing the fight against ISIS in Syria and to take all necessary measures to avoid a problem similar to the threat of ISIS in the region.

Erdogan told Trump that he was “frustrated by the failure of the US military and security bureaucracy to implement the agreement” signed by the two sides last August on the establishment of a buffer zone on the Syrian border with Turkey, the White House statement said.

Accordingly, Trump invited Erdogan to meet in Washington next November.

Contact between Trump and Erdogan comes a day after the latter renewed threats to launch an “air and ground” military operation against the Kurdish YPG in Syria, which Turkey considers a “terrorist” organisation.

Erdogan had previously warned that his country’s patience was running out since its deal with US officials in August to establish a safe area in northern Syria hasn’t been implemented yet.

“We have made our preparations, completed the operation plans, and gave the necessary instructions,” the Turkish president said in a televised speech on Saturday, adding that the offensive could begin “as soon as today or tomorrow.”

In the same context, Turkish Foreign Minister Mevlut Cavusoglu said on Monday that his country was determined to clear its border with Syria from militants and ensure Turkey’s security.

Turkey says the US has been slow to establish the safe region. The US supports the Syrian Democratic Forces (SDF) led by the YPG, with whom it worked closely to drive ISIS out of large areas they controlled.

Turkey has repeatedly threatened to launch a unilateral attack in northeast Syria, where US forces are based alongside SDF fighters.

Hours after the threat of Erdogan, the Kurdish self-administration called on “the international community with all its institutions to pressure Turkey to prevent it from launching any attack against Kurdish control areas, in a statement.

The SDF said on Monday that US forces have withdrawn from the northeast after they failed to honour their pledges and warned that the imminent attack Turkey was threatening would undermine its efforts to crush ISIS.

The Turkish army launched two attacks in Syria: the first in 2016 against ISIS and the second in 2018 against the YPG, during which it was able to take control of the Afrin area (northern Syria).

Iran has also joined the Turkish-Syrian-Kurdish crisis and showed readiness to cooperate with Syria and Turkey to resolve differences on the issue.

Iranian Foreign Minister Mohammad Javad Zarif said his country told Turkey that the only way to maintain its security was to stabilise Syrian forces in border areas with Turkey. Zarif added that his country’s position on the presence of Turkish forces in Syrian territory is clear.