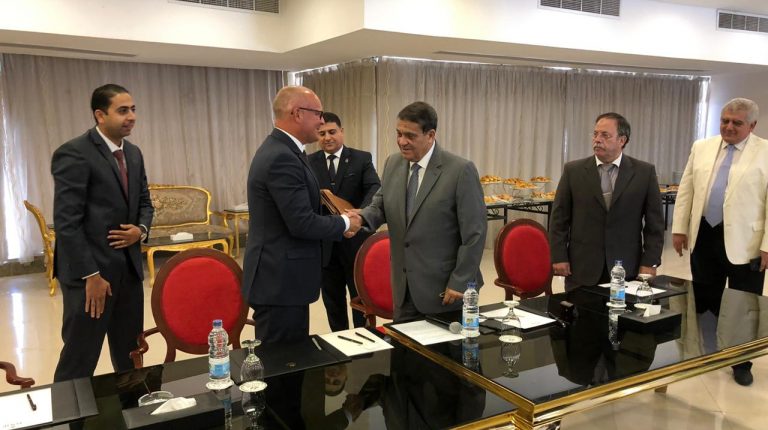 The Administrative Capital for Urban Development (ACUD) company has signed a memorandum of understanding (MoU) on Tuesday with the German Dorsch Group to manage, operate, and maintain the smart integrated system of all components of drinking water, irrigation, and sewage networks and their stations in the New Administrative Capital project (NAC).

On the side lines of the conference, Michael Becheriet, managing director at Deutche Wasser International, told Daily News Egypt that the MoU states the launching of a new joint venture company between ACUD and a consortium led by Dorsch besides two other German companies specialised in providing such services.

The MoU will come into effect within six months, Becheriet revealed, adding that the revenue share of ACUD is 51% and for Dorsch is 49%.

The company, after signing this MoU, will begin its operational procedures.

During a press conference, Ahmed Zaki Abdeen, chairperson of ACUD, said that the company aims to operate and manage NAC’s utilities in a smart way and reduce water loss through a system provided by the German group.

“We also want to succeed in the original model of smart cities implemented by the Egyptian government in 14 new cities, to be transferred and publicised successively in other cities after our success,” Abdeen elaborated.

Abdeen stressed that the ACUD is looking for European companies working in infrastructure development, specifically German companies. ” Indeed we had offers from Dutch and French companies, but the offer, which came from the German company is very suitable for us and we hope to implement it fully,” Abdeen added.

It was agreed that the authorized capital of the joint venutre company would be an Egyptian-German joint investment with a value of EGP 250m, Abdeen revealed.

“The company is responsible for providing integrated services to all customers living in NAC project in the field of water, drainage and irrigation in accordance with the highest international standards provided by the company and its partners to customers in Germany, Abdeen explained.

Abdeen noted that the Egyptian government provides them with full support in implementing the MoU. The MoU is planned to be activated within the 14 remaining smart cities in Egypt.

The two companies will work hard after signing and transferring the MoU into a contract, he said, adding that Egyptian political leadership is determined in succeeding in its collaboration with the German company, and hopes to let this be the beginning of a fruitful venture in the German market.