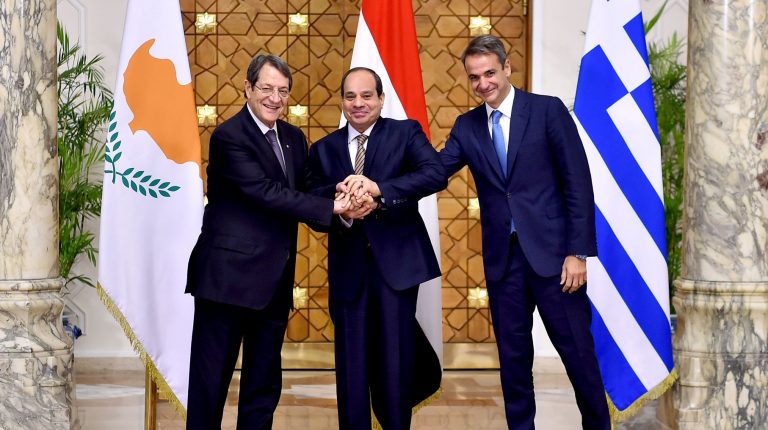 Egypt strongly rejects all Turkish practices in the region and its attempts to seize parts of Syrian territories, President Abdel Fattah Al-Sisi said on Tuesday.

During a joint press conference with the Cypriot President Nicos Anastasiades and Greek Prime Minister Kyriakos Mitsotakis, Al-Sisi voiced Egypt’s support for the United Nations’s (UN) envoy to Syria, stressing the need to resume dialogue between all parties of the Syrian crisis under the umbrella of the UN.

Anastasiades said that Turkey’s drilling in Cypriot waters is illegal and violates international law. He added that Cyprus is using its available means to stop Turkey from continuing its practices threatening the region’s security and stability.

Moving to other regional issues, Al-Sisi voiced his support to Palestinians’ legitimate rights in establishing an independent state with East of Jerusalem as its capital. He also stated that there is no other path but the political solution to end the crisis in Libya in restoring the country’s stability and security.

on a different note, Al-Sisi highlighted that terrorism is “a global phenomenon,” calling for intensifying efforts to draft international legalization to confront terrorist and extremist groups.

The president added that the state of unrest, which the Middle East is witnessing, threatens any available opportunities for the region’s countries and deprives the peoples of  their rights to safety and dignity.  He also said that it is creating new crises such as terrorism, illegal immigration, and human trafficking.

The seventh trilateral summit between Egypt, Cyprus, and Greece kicked off on Tuesday headed by Al-Sisi.

Earlier, Al-Sisi and Anastasiades addressed enhancing energy cooperation, and tackled the 2018 agreement to extend the gas pipelines from the Aphrodite gas field in Cyprus to the liquefaction stations in Egypt, according to the Egyptian Presidency’s statement on Tuesday.

The three countries also signed cooperation agreements that aim to boost investments from 2012 to 2019.

The 6th trilateral Summit between the three countries was held in October last year, while the tripartite cooperation mechanism was firstly launched in November 2014.

Earlier on Saturday, Egypt reaffirmed its support to Cyprus’ rights and sovereignty over its Eastern Mediterranean resources, emphasizing the need to respect and implement rules and provisions of international law.

Meanwhile, Egypt warned against continuing any measures violating the Cypriot capital Nicosia’s rights and threatens the security and stability of the Eastern Mediterranean region.

The European Union also agreed on July to impose several political and financial sanctions on Turkey for its persistence on illegal drilling in the regional waters of Cyprus.