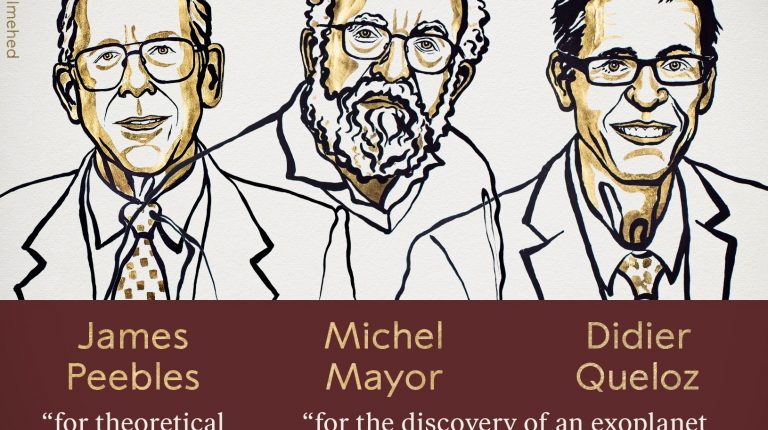 The Royal Swedish Academy of Sciences has decided on Tuesday to award half of the Nobel Prize in Physics 2019 to the Canadian physicist James Peebles for theoretical discoveries in physical cosmology.

The other half of the prize went equally to two Swiss physicists Michel Mayor and Didier Queloz for their role in the discovery of an exoplanet orbiting a solar-type star outside our solar system.

Works of the three physicists have contributed to our understanding of the evolution of the universe and Earth’s place in the cosmos.

The theoretical framework developed by James Peebles over the past two decades is the foundation of our modern understanding of the universe’s history, from the Big Bang to  present day.

“Peebles’s discoveries have led to insights about our cosmic surroundings, in which known matter comprises just 5% of all the matter and energy contained in the universe. The remaining 95% is hidden from us. This is a mystery and a challenge to modern physics,” according to the academy’s statement.

After decades of exploring the Milky Way galaxy, our home, Michel Mayor and Didier Queloz made the first discovery of a planet outside our solar system, an exoplanet, orbiting a solar-type star, leading to a revolution in astronomy.

Depending on their discoveries, researchers were able to develop new theories about the physical processes responsible for the birth of planets.