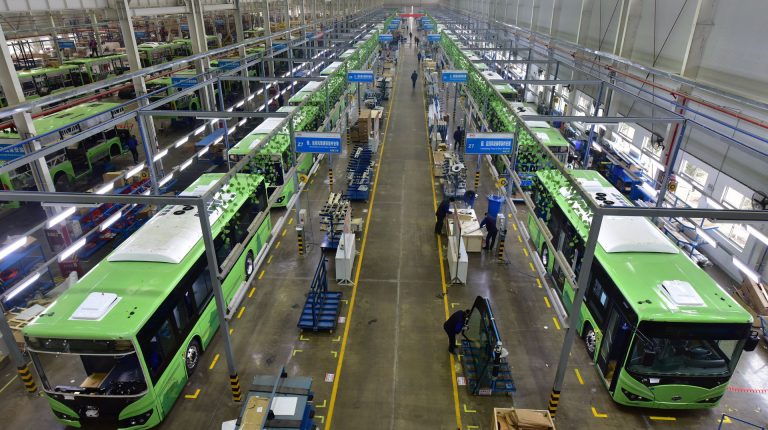 Prime Minister Mostafa Madbouly chaired a meeting in September on a national project to convert mini and micro buses to run on natural gas.

During the meeting, the Executive Director of the Micro, Small and Medium Enterprises Development Agency (MSMEDA), Neven Gamea, highlighted the efforts of the agency to implement the project upon the instructions of President Abdel Fattah Al-Sisi.

She explained that a committee was formed under the chairmanship of the Minister of Military Production to discuss the mechanisms of implementing this project, pointing out that the Ministry of Military Production has already determined the initial cost of the project. The project includes establishing 351 natural gas supply stations in certain governorates, converting 142,000 vehicles to work on natural gas and gasoline, and replacing about 88,000 vehicles currently running on diesel which are 20 years old or more.

Madbouly instructed the attending officials to put an integrated executive plan for the establishment of gas stations under the supervision of the Ministry of Petroleum and in coordination with the Central Bank of Egypt (CBE), to be completed within two years from now. He stressed the need for continued coordination and follow-up by MSMEDA until the completion of the conversion of 142,000 vehicles to work on natural gas within three years. This is also planned to happen under the supervision of the agency and in cooperation with specialised oil companies.

The meeting discussed the situation of vehicles older than 20 years and still working on diesel. The target is to develop good specifications for micro buses to be manufactured by the Arab Organization for Industrialization (AOI), taking into consideration the various technical and environmental aspects to settle the industry in Egypt.

At the end of the meeting, the prime minister pointed out that another meeting will be held soon with the car manufacturers to agree on the production plan for the natural gas vehicles in Egypt. They will also be discussing their advertising campaigns for the project in conjunction with the start of its implementation.

Abdel Moneim Al-Taras, chairperson of the AOI, said that the authority is negotiating with several international companies to jointly produce micro and mini buses.

He pointed out that negotiations are taking place with 11 international companies, including Toyota, to get into a partnership with the authority. He predicted a high demand for these vehicles, which will be a big move in attracting investments.

He revealed that the authority plans to produce the first fuel-efficient micro bus next June.

Al-Taras said the locally produced cars will achieve the required reliability and will be in line with the latest international specifications, especially in terms of safety. They will also be available for consumers at a fair price. He stressed that the government is taking the necessary measures in the replacement process.

Commenting on the disposing of older parts of converted mini and micro buses, Medhat Nafie, chairperson of the Holding Company for Metallurgical Industries (MICOR), said that the best option is to use the scrap as raw material in steel factories. He added that recycling bus scraps is the most economically feasible option.

Nafie pointed out that the export of scrap has no economic feasibility at all due to its low-return as it will require various fees and expenses. He also stressed the need to establish areas for scrapping cars in Egypt as soon as possible to get rid of old worn-out cars that are causing environmental problems and obstructing traffic.

Moreover, Hani Emad, head of investment and credit sector in MSMEDA, said that the agency plays an active role in the system entrusted with the renewal and replacement of old micro buses and their conversion to run on natural gas.

He explained that MSMEDA cooperates with several companies specialised in converting cars, such as Gastec and Car Gas, which are affiliated with Egyptian Natural Gas Holding Company.

Emad pointed out that the three-year period set by the cabinet to convert 142,000 micro buses is sufficient according to the two involved companies, especially since these companies believe there is no problem in securing finance.

He added that MSMEDA is in the process of signing two contracts with the two companies worth $80m for the conversion of 10,000 micro buses, and it is likely that their conversion will be completed in less than three months according to the timetables set by the two companies.

Regarding the replacement and renewal of the old micro buses, Emad explained that the coordination between the agency and the CBE is currently taking place to reach a unified financing product applied through the entire banking sector to complete the conversion of 80,000 micro buses.

He added that the agency is a member of the committee formed to study the issue of replacing the light vehicle tuk-tuk with mini vans, but is still under research.

In a relate context, Medhat Koraytem, former assistant minister of interior, stressed that the new traffic law stipulates that all cars that have been working for more than 20 years must be replaced. A fund under the Minister of Finance will be established for this purpose, with an independent legal personality and a special budget.

He added that no final executive regulation has been issued for the law to replace old cars, which means that the law preventing licencing cars aged over 20 years has not yet been finalised as this law has not been discussed yet at the House of Representatives. Koraytem stressed that the decision to cancel the licencing of old cars will not come into effect at once, but through organised and gradual steps according to the age of cars, starting from older to newer cars. He explained that the law will be in force two years after its issuance and publishing in the official newspaper in order to prepare and maintain roads as well as equip them with means of traffic control.

The aforementioned fund will specialise in providing loans to finance the purchase of new transport vehicles to replace old ones. The fund will receive contributions from the state budget, returns on investment in the fund, grants, and donations.

Regarding the replaced cars, Koraytem explained that they will be fully turned into scrap to avoid traders taking control over them or selling them as spare parts. This will be done in coordination with the ministries of environment and social solidarity. They will be sold as spare parts in public auctions.

He added that the state provides facilities for the owners of the worn-out vehicles, including long payment plans with instalments for seven years. This is in coordination with Nasser Bank and the Social Solidarity Fund.

He said that car owners’ main concern in the replacement project is the instalments, prompting many individuals to retreat from joining the project.

Ali Tawfik, head of the Egyptian Auto Feeders Association, said that Egypt does not have enough natural gas reserves to convert all vehicles taxis to operate on it. He stressed that Egypt still imports natural gas from abroad, which would reduce the project’s economic feasibility, especially in light of the dependence of high-consumption industries on natural gas, such as the plastic industry. He added that it is not acceptable to use natural gas to operate cars when there is a more effective alternative like electricity.

Tawfik pointed out that the unavailability of natural gas stations across the country is a major challenge for car drivers compared to the easy access of other cars to gas and diesel stations, stressing that the first step of the project is providing the required infrastructure.

He stressed the need to import taxis that run on natural gas instead of converting them due to the difficulty of the conversion process and the need for special specifications.

Tawfik added that Egypt has the ability to follow European, American, and Japanese specifications in converting cars to natural gas, stressing the state’s ability to provide the necessary test labs for this.

He pointed to the negative effects resulting from the use of worn-out cars, as Egypt became one of the highly polluted countries in the world, mentioning that the decision of the state to replace these old cars is very important and must be preceded by providing carbon emission metres as is the case in European and American markets. And if a car was found to produce harmful emissions, it must be replaced, which is the first step to ensure the conversion to natural gas goes successfully.

He suggested replacing the old cars of government agencies and bodies before applying this project to citizens, which would act as an incentive to replace worn-out cars.